A goofy, over-the-top marketing campaign for Zarco* tequila made its Twitter rounds yesterday (thanks, David Perry, ChemBark, and Chemjobber!).

0:01 - Welcome to Zarco! Why, oh why, does everyone believe labs need a blinding hospital-white color scheme?
0:03 - Do you usually use a light microscope to examine molecules? I certainly don't.
0:04 - That retort in the background is boiling away, but there's NO FLAME underneath it (?!?)
0:06 - When's the last time you used a separatory funnel to isolate your distillate?

0:11 - Laymen's terms - Dear Zarco: Distillation doesn't work like that! The crude fermentation isn't sitting there in some sort of "pre-alcohol" waiting for you to add heat. When you distill, you're purifying the ethyl alcohol (their 'C-two-H-five-Oh-H') away from the water.

0:17 - A third undiscovered 'element' - this part is so inane I forgot to laugh. Short answer: no.
0:22 - Chemetron Medical products collection jar in the background. That's a plastic autoclave bottle; I'd never use it for this.

There's a few other videos save on their YouTube portal, Highlights include near-complete lack of gloves, goggles, or other safety equipment, and (chuckle) a background reflux condenser, which you'd actually use to distill something, sitting abandoned on a clamp.

I get the kitschy, comedic sci-fi vibe Zarco was going for, but they'd better hope their target audience isn't science literate. I can't get past the stupid long enough to buy a bottle.

*Does it bother anyone else that "Zarco" sounds like Darco, the fine activated carbon powder we actually DO use in lab? (to remove colors from solutions)
Posted by See Arr Oh at 7:27 AM 4 comments: 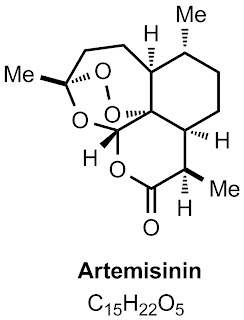 
Let's reword that: How will changes in funding affect total synthesis, the study of assembling complex natural products from simple commercial chemicals?

Now, this isn't the first time folks have declared the synthetic field to be on death's door. Hardly. So, I answered the way I always do, which has kept the field alive and kicking long past Woodward:


Chemjobber, always one for a savvy one-liner, immediately jumped on board:

"Origin of Life: The Gliotoxin Hypothesis"

OK, Readers, I'm sure you can do better. Leave me some gut-shakers and knee-slappers in the comments section!

I'm only two chapters' deep* into Mary Roach's new book Gulp, yet I'll certainly enjoy the remaining 300-odd pages. How do I know? Here's an excerpt, from p. 28 (emphasis mine):


"A quick word about chemicals and flavors. All flavors in nature are chemicals. That's what food is. Organic, vine-ripened, processed and unprocessed, vegetable and animal, all of it chemicals. The characteristic aroma of fresh pineapple? Ethyl 3-(methylthio)propanoate, with a supporting cast of lactones, hydrocarbons, and aldehydes. The delicate essence of just-sliced cucumber? 2E,6Z-Nonadienal. The telltale perfume of the ripe Bartlett pear? Alkyl (2E,4Z)-2,4-decadienoates."


Cheers, Mary. I can't wait to read the rest!

Note: Neurotic Psych and Science News have also written reviews; I'll round up my thoughts better after I finish the book.

*So far, only one tiny sticking point: Roach refers to "oxidating" beer (p. 25), a term that I believe has been largely supplanted by "oxidizing" to refer to interaction of food chemicals with molecular oxygen. I've even grabbed the NGram: 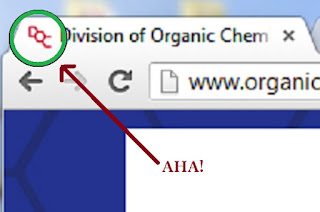 The Periodic Table of Mugs

Another big thank-you to the ACS for my brand-new set of periodic table mugs!

I realize I'm one of the lucky ones, and that my earlier agitation may have forced someone's hand. But I'm serious here: Keep up the program, ACS! By membership year, I'm deep into "Row 3" of the table, and I'd love to see some beautiful transition metal mugs. Wouldn't you?
Posted by See Arr Oh at 4:31 PM 6 comments:

Email ThisBlogThis!Share to TwitterShare to FacebookShare to Pinterest
Labels: ACS, cool, mugs, thanks

Had a bit of fun this morning playing with Scientific American's new interactive Periodic Table.

Most of the entries were spot-on, and the link-backs to Nature Chemistry's IYE series (now free!) certainly help a lot. Just one small quibble: 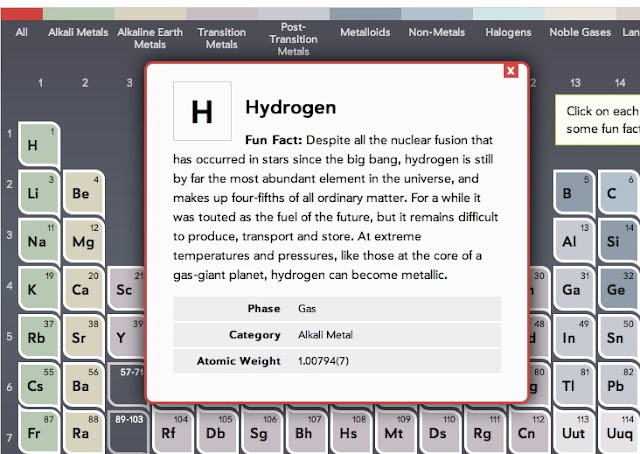 Doesn't that say "alkali metal?" Although I appreciate that might be true at incredibly high pressures (thanks, Dr. Eisen, for link), what about everyday, ordinary hydrogen gas?

Protons? Sure, they're sort of the classic metal-though-not-a-metal. But, to be fair, you can make lots of things behave like metals (see: O, Br, I, C, Si...) that normally wouldn't.

I'd love to hear some spirited debate in the comments, and appreciate any Sci Am editorial responses.

Neil Withers jumps in with a contradictory example, also from Nature.
Posted by See Arr Oh at 11:48 AM 1 comment:

There's a pithy NY Times round-up of the free food and services NYC tech start-ups lavish on their employees. (SPOILER - they sound awesome):


"Within my first week of working at a start-up, I acquired a gut. The reason was obvious: there was free food everywhere, it was delicious and I was nervous . . .on Monday, warm cookies from the Upper West Side bakery Levain appeared in the kitchen. Buttercream cupcakes followed; apparently it was somebody’s birthday. (It is always somebody’s birthday.) At noon, employees gathered for a catered lunch of barbecue. Two hours later, a Pinkberry station rolled into the office with the full battery of toppings."

The author raises the stakes in each paragraph, moving from free food to beer, coffee, yogurts, fancy juices, then up to concert tickets, in-office manicures, nap times, and - I am not making this up - a room full of puppies.

Back in my day (in *cough* late '90s small biotech), I distinctly recall watching the first Keurigs pump out decadent self-serve coffee pods, and thinking how lucky we were to have such a great gizmo. Later, I toured a boom-times GSK, noting agog the subsidized food, dry cleaning, in-house gym, etc.

"Mr. Bushnell of Atari, a veteran of the start-up world, was asked where he draws the line between 'productive perk' and 'wanton decadence.' His answer: Well, he doesn’t.
'I’ve often felt that it is somehow wrong to have an engineer spend any time at all scrubbing his own toilet,' he said. 'It sounds elitist, but these people are highly important to the economy and to the company. Offering maid service to them as a perk makes total sense.'"

Amazing. Would that all start-ups felt the same way.*

*By my count, I've scrubbed my toilet at least 40 times since starting at my current job. Par for the course. I've heard of start-ups with trash and mop duty, too.
Posted by See Arr Oh at 4:41 AM 1 comment:

I want to go to a conference. Very, very badly.

It's been some time since I've met my scientific brethren to talk, dine, listen, exchange ideas, and play random pickup sports.

I miss you all terribly!

Young professors stew in that perfect mix of nerves, excitement, and exhaustion as they're expected to fly here and there to give talks, consult, and generally build their tenure case. Big Pharma, too, makes a point of sending their best out into the world to scope out new drug leads or build academic connections for future hiring.

Tiny companies? No travel budget. No conferencing. Do not pass Go, don't collect that per diem.

It's a Catch-22 of sorts - Without conferencing, you don't meet new folks who could potentially get you the kind of jobs that would send you to conferences. Rinse, repeat.

So, dear readers, I'm wondering: Does anyone know of industry awards one can apply for for travel / registration assistance? I'm aware of ACS' Young Investigator Symposium, and I think some industry-types get invited to Lindau.

Help me think of a few more?

*To clarify, I've never been on an Airbus, or flown to a posh international destination. I've certainly been on planes enough, see: job search.
Posted by See Arr Oh at 11:55 AM 5 comments:

Did you have fun playing Wordle Chem Challenge One and Two?

This one kicks up the difficulty another notch. I've searched through the Nobel Prize website, and grabbed the press release / presentation speech (pre-1972) for several laureates. Can you piece together who's who?

(Note: As in past challenges, I've stripped out the names of the winners, as well as certain non-helpful terms - URL, website, etc.)

Think you know 'em? Leave answers in the comments!
Posted by See Arr Oh at 6:38 AM 9 comments:

I know we're only six months into 2013, but I'm calling it:
GEARS are the "hot" item to have in your graphical abstract this summer!

Did you have fun playing the first Wordle chemist challenge?

I recall garnering some good-natured criticism, when I counted papers, for only including male chemists in the first go-'round. In the spirit of equality, here's three more Wordles for well-known female organic chemists!

Submit your answers in the comments!
Posted by See Arr Oh at 8:20 PM 5 comments:

I thought I'd extend the concept a bit, and turn Wordle loose on some unsuspecting academics. Below, I've shown five graphics culled from the "Publications" page of five well-known synthetic organic chemists - minus a few* common words.

I've removed the main author's name from each, but can you still guess who they are?

Leave a guess in the comments...if you dare!