I don't usually wax nostalgic on this blog, but I'll break character for Mr. Nimoy. I'm sure many scientists feel the same way - for me, his portrayal of Spock illustrated the best virtues of chemists: Patience. Curiosity. Intrigue. Skepticism. Diligence. Logic.

Capped, of course, with a wry, dry sense of humor.

Thanks for everything, Leonard.
Posted by See Arr Oh at 6:39 PM 4 comments:

Through the wonders of the Internet, I've found this still image from the 2003 Linkin Park video for "Numb": 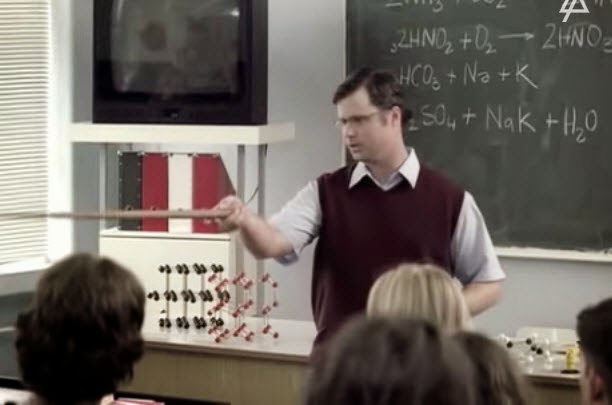 In the video, a young, disaffected student dreams of traveling to far-flung cities to practice her true talent - sculptural drawing. However, it seems an evil chemistry professor stands in her way.

But look behind the (hilariously stereotyped) man with the chalkboard pointer. NaK...as an alloy, perhaps? And how come there's a subscript number before the nitrous acid?

If that were my science teacher, I'd feel "numbed" by his complete lack of chemistry education. 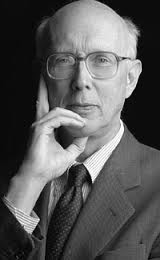 As part of the "Future of Chemistry" essays sponsored by BASF, professor George Whitesides opines in Angewandte Chemie Int'l Edition that chemistry must change in order to keep pace with societal demands and changing scientific landscapes.

Familiar themes pepper his prose: the tension between "curiosity-driven" and "directed" research, between organizational behavior, motives, and rewards, and several pressing calls to action. After setting some ground rules and introducing us to his main actors - academia, industry, and government - George shifts his essay towards some familiar* grand challenges:


"What is called 'chemistry' now may only be a distant cousin to the chemistry of 50 years from now."

Origin of Life. Informatics. Energy generation, storage, and usage. Cognition. Human augmentation. Death. In twenty-two points, he covers the entire human experience from life to death, from single cells to complex global societies, then leaves himself two outs: numbers 23 ("All the rest") and 24 ("Combinations with adjacent fields").


"Chemistry tends to be excessively modest in its ambitions. Excessive ambition might sometimes be a better strategy."

Hold on for a minute...anyone feel a strange sense of déjà vu? For the past three decades, Whitesides has been in the business of not just inventing the future, but actively predicting it as he goes:

2013: Reinventing Chemistry - RSC Roadshow
2013: Memo to Chemists: Move Away from the Molecule
2013: A Glimpse Into the Future of Diagnostics
2012: Whitesides on Discovery and Development
2011: Whitesides & Deutch on What's Wrong with Academia
2011: Chemistry and the Worm
2010: Towards a Science of Simplicity
2007: Revolutions in Science
2004: Assumptions: Taking Chemistry in New Directions
2001: The Once and Future Nanomachine
1999: Complexity in Chemistry
1995: Holy Grails of Chemistry
1990: What Will Chemistry Do in the Next 20 Years?
1988: Materials for Advanced Electronic Devices - Chemistry for the Future
1986: The Role of Chemistry in Materials Science

Certainly, this essay reads like anything other than a traditional chemistry text. We hear about chemical granfalloons** -- who are synthetic organic chemists, anyway? -- catalytic networks, Facebook and Twitter ("avatars of social engineering"), and even the rather Huxleyan concept of population control. Pasteur's quadrant, aka the choice of research that solves social problems while inventing fundamentally new science, represents for Whitesides the idealized goal, though he admits we're presently much more stuck in the "Liebig apprentice model" of traditional research groups.

Especially resonant for me were the areas Whitesides identifies at collaborative interfaces: megacity logistics and cancer prevention involve far more cooperation along "unfamiliar boundaries" than I had perhaps realized: social, environmental, computational, psychological, and (of course) chemical.


I found Whitesides' friendly, casual conversation with the reader, breaking down traditional scientific narrative for a personal exchange, rather refreshing. You can actually hear him speaking through the page, his calm, familiar cadence and confident, challenging affect. Recall that George himself has opined often on just how to communicate scientifically; looks like he indeed follows his own presciptions.

I recommend a full read-through for those so inclined. I'll close this meta-review with two points. First, a strong piece of advice from Whitesides' 2007 Priestly Medal address:


"Chemists are the natural leaders for much of the research that needs to be done. But physicists can learn molecular detail, and biologists can learn differential equations. If we do not wish to work on these problems, others certainly do. If it is not our revolution, it will be someone else's."

Finally, Whitesides offers a poignant answer to the age-old stuck-on-an-airplane question: What do chemists do? I won't give away the answer here, but suffice to say it's both more direct and more engaging than how I've traditionally answered. Go have a look.

----
*So familiar, in fact, that he references two of his own previous predictive essays. See also, from Philip Ball, here.
**I'll follow professor Whitesides' daring example of directly citing Wikipedia for this Vonnegut quote.
Posted by See Arr Oh at 6:35 AM 8 comments:

What was the first mention of "Chemistry" in the journal Science?

You might think, given that Science started in 1880, that an author would first refer to 19th-century champions such as Perkin or Wöhler. Perhaps they'd write of new fuels for transportation, electrochemistry, or the advent of large chemical industries such as BASF or DuPont.

None of these. On page 4, issue 1, famed comparative anatomist and professor Burt Wilder writes:


"A Bit of Summer Work: Notwithstanding the number of 'Summer Schools of Science' to be in operation this season, many teachers are likely to pass the vacation at a distance from the facilities afforded by organized laboratories. How shall they employ their time?

. . .the teacher who hopes to make his instruction each year more thorough than the last, will be pretty sure to spend the remaining month or two in the search of help from books, and, while regretting the vagueness of the information thus obtained, may seldom think of making it more real by personal observation.

Now it is true that in some branches of science this may require appliances not readily obtained. This is the case with Chemistry and Physics, and some parts of Natural History. But Botany and Entomology may be pursued almost under any circumstances, and I venture to suggest that at least one kind of anatomical work may be carried on with but a slight amount of apparatus."

Wilder's cure for teachers' potential summer slacking? Purchasing "a very sharp knife, and a pair of 'wire-nippers'..." - all the better to study the (freshly-dissected) brains* of cats, sheep, dogs, and rabbits. He closes his essay with this potentially tongue-in-cheek phrase:


"If this is done, by the end of summer the teacher will have become better able to appreciate the peculiarities of the human brain when one comes in his way..."


*Pssst! Did you need instructions for that? Wilder generously provides an address at Cornell where one can obtain hectograph (printing by means of aniline dyes and gelatin plates) copies of cat dissection protocol.

Every so often, a reaction behaves so well that you just publish the crude NMR spectrum.


Amazing - heat up a heavily conjugated triyne for 2 days, and it just does one thing, reproducibly and immaculately. I wonder whether Hoye and his group have any further tricks up their sleeve to try and control the diastereo  enantioselectivity of that sweet new quaternary center...time will tell.

--
*Please allow me touch of professional jealousy - this reaction opened up so many different questions for the Hoye group that they've published 10 manuscripts on it in just the last 3 years. Damn.