George Takei, an American actor / activist perhaps most famous as "Sulu" from Star Trek, inadvertently let slip a fantastic bit of advice to Terry Gross on Fresh Air (emphasis mine):

"I've been on speaking tours advocating for equality for the LGBT community. But what we noticed was I was already talking to the converted — either LGBT people or allies — and what we needed to do was reach what I maintain is the decent, fair-minded, vast middle — people who are busy pursuing their lives and don't stop to think about other issues."

Just replace "equality for the LGBT community" with "chemistry for the general public," and you stumble on a very familiar problem in the blogosphere; communication to that "vast middle" is something we ponder every day.
Posted by See Arr Oh at 6:27 AM 10 comments:

It's not often you see drug candidates advanced with cubane substructures.* A collaborative group from the UK branch of AstraZeneca and Oxford University aims to change that: a report in Organic Letters indicates they've produced gram-scale quantities of cubane derivatives with common med-chem handles already "baked in."

Starting from a 1,4-cubane diester, Burton, Davies, and Wlochal take turns elaborating each side into thiazoles, beta-diketones, nitriles, amine salts, and ynones. Though more cautious readers might expect the cubed synthons to go up in smoke, they actually seem to survive fairly rigorous conditions - boiling water, phosphoryl and oxalyl chloride, TMS triflate, LDA.

I'd be most interested to hear from any readers who integrate these new building blocks (sorry, couldn't resist!) into their research. It's hip to be...cubic.

* On Twitter, CJ (rightly) points out that the authors could have done some DSC (stability) and solubility assays, just to put minds at ease that these synthons really could be integrated into a drug campaign.

A few days ago, one of my coworkers at the new job asked me to tell them what the newest, coolest trends in synthetic organic chemistry were. And, I readily confessed, even though I write this blog, I'm still in the dark about exactly what folks find exciting, even week to week!

New ligands for palladium? Been there.

Even cobalt, which seems to be the new darling of the catalysis community, feels like it's taking a comfy chair in all my favorite journals.

So, tell me, Internet: What's the newest, coolest stuff you've heard about?
Posted by See Arr Oh at 9:59 AM 20 comments:

Remember when I posted about the highly-similar cyclobutane insertion chemistry coming out of the Cramer group? Well, a new contestant has just been published in ACIEE:


I jumped down the rabbit-hole of the Supporting Information, and returned with these two "general" procedures - blink, and you'll miss the differences!

Does anyone else believe that these could have been published together, in a single high-impact paper?
Posted by See Arr Oh at 6:09 AM 11 comments:

Apparently, U.S. Senator John Walsh has been accused of plagiarising a final assignment for his Master's degree. And how did the New York Times cover this story? Why, by literally "cantrilling" the paper!

Remember us all when you're famous, Stu.
Posted by See Arr Oh at 7:14 PM 4 comments:

Listen, we had a good run together. But I've fallen for another: ChemBioDraw Ultra 14.

My good friends at PerkinElmer (PKI) were kind enough to grant me trial access to their spiffy new chemistry drawing software. As an avid user since, oh, say, ChemDraw Pro 4.5, I feel confident in stating that this version wins all around for smoother operation, better templates, easier file export, and better shortcut keys.

So, I figured what PKI really wanted me to do most was to try and BREAK ChemBioDraw 14.0
. . .if I could. Did I succeed? Let's talk a walk through the software and find out.

Starting at the top, I figured I'd check the "What's New?" link in the help menu. One thing I appreciated more than I thought? ChemBioDraw 14.0 directing "Help" queries into the appropriate section of the User Guide. Version 13 still spawned its help window inside Windows help, with the infamous purple booklets leading you down wild goose chases of clunkily-presented information.

Drawing hasn't changed much since 13.0. At least the text direction auto-correct -- which drove me batty in former iterations -- seems to have been tweaked; the system now opens my older drawings the way I typed 'em in originally (hence, below, attaching pasta sauce to a scaffold in place of a sugary placeholder).


The CBD 14.0-to-SciFinder jump works much more smoothly than I had anticipated. For those of us who shuddered through dial-up desktop versions of SciFinder in the late '90s, this version feels like the sleek Lamborghini of the search world. After drawing (or importing) my structures of choice, I lassoed them up and pressed the little "SciFinder diamond" on the top toolbar. Within about 5 seconds, a new window opened with the standard exact / substructure motif. Two clicks later, I'd be deep into the primary literature.

So, my goal was to break the system, right? Here's a logical place to try - I attempted to load each and every complex structure I had drawn since starting my fledgling blogger's career, around 2009 or thereabouts. Again, I was amazed by the speed and accuracy of the SciFinder pop-out, which returned roughly 90% of the correct molecules I'd searched for (below):

However, it's not all bubbles and sunshine. Two of my molecular queries bore no fruit**; perhaps they're too new to have been uploaded into CAS's databases yet. But one thing remains tricky: drawing and searching for metallocenes. Along with their new push into biology clip art, ChemBioDraw has a renewed focus on making sure you've got those sandwich compounds properly aligned. 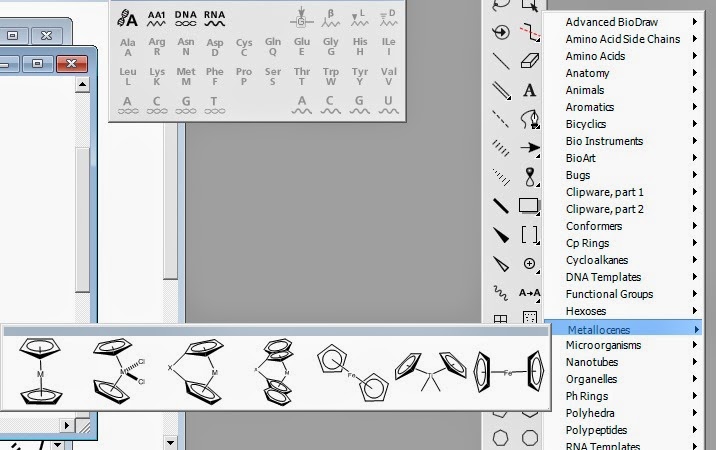 Now, even after aligning my query using the proper template, SciFinder makes a mess out of it.


So, obviously I went looking for things to break, and found some rather limited examples. Honestly? The rest of the program works pretty well. And writing this review gave me a wonderful opportunity to poke and prod at the product in ways I hadn't in far too long.*** I finally realized you could change the solvent on the NMR predictor! I played around with expanding and collapsing peptide and RNA strings. And the post-drawing mods to more complex peptides, like disulfide and lactam cross-linking? Much better.


I will take this final moment to remember a long-lost piece of ChemDraw lore. Once upon a time, to "clean up" one's structures, the icon looked something like this (right). I've heard it referred to as a jellyfish, a squid, a broom (no!), but I always knew it as a friendly little octopus. With CBD 14, any doubt about its brushiness has been cast aside with a full-out icon redesign.


Looks great, guys. Now let me think about more ways to use it for actual work!


Thanks again to Philip Skinner and PerkinElmer for the chance to review the software.
---
*For other blog reviews of ChemDraw products, see Jess The Chemist, Andre the Chemist (no relation), or Chemjobber.

**Here's the structures that returned empty SciFinder searches. Both compounds (left, right) were first reported in 2014.

Wow, everyone. I feel so honored and humbled that you visit my tiny little corner of the Internet sometimes.

Thank you for your continued support and online interactions.

(Could it be that ChemCarnivals have dropped out of favor? Or am I just not playing along like I should be?)

(I still owe you guys those chemical pronunciations...I haven't forgotten!)

Elsewhere: Carrie Arnold of Science Careers asked me about grad school. Still pinch-hitting at Food Matters. I spoke with reporters from Nautilus and Chemistry World, but I've not yet seen their stories.

Slow down, Guangbin!
(said I, channeling my inner Dr. Freddy...)

Guangbin Dong of the University of Texas-Austin has just published three papers in three different journals with Impact Factors over three. What's more - he did it all in the same week.

The papers in question?

"Cooperative alkylation of cyclobutanones and olefins leads to bridged ring systems by a catalytic [4+2] coupling"
Nature Chemistry, published 6 July 2014; 2013 IF: 21.8

Congratulations to Prof. Dong for winning the inaugural award! But, I'm sure I've missed others who've been so deserving. Readers, have you noticed anyone else - present OR past! - who made this many simultaneous "shots on goal"?

I love finding molecular "diamonds in the rough." Especially when they look, well, a bit like diamonds.

While strolling through the literature, I did a double-take at this polycyclic caged structure reported by Santiago Vázquez  (Universitat de Barcelona) and coworkers. Wow!

Spawned from a "highly pyramidalized" (nonplanar) olefin dimerization, it features three cyclobutanes, four "envelope" cyclopentanes, and four cyclohexanes locked in their "boat" conformations (Even worse? All those eclipsing methyl groups on each end . . .jeepers). One might expect a thing like that to fall apart in a minute with a little heat, but, amazingly, the compound remains stable up to 500 degrees Celsius.

A little reference digging proved that similar caged olefins were first produced almost half a century ago at Smith Kline & French, using a seven-step prep reliant on chloroketals and long-duration sulfuric acid stirs (yuck). A major step forward came in 1970, when Avila and Silva (San Fernando Valley State U) realized that blasting UV light at a double-Diels Alder adduct of acetylene dicarboxylic acid led to a symmetric anhydride precursor.

Vázquez extended this little gem of a starting material towards finding active antiviral analogues of amantadine. Using the imide version of Silva's anhydride, Vázquez produced a caged secondary amine (see right) that exhibits activity against mutant versions of the H1N1 flu virus. His compound also inhibits the influenza A wild-type proton channel; molecular dynamics simulations indicate that it performs a "flip" relative to bound amantadine that plugs up this pore more effectively.

Only five weeks to go until ACS San Francisco! Who's excited?

(With gracious nods to the ACS and Dr. Leuenberger for their long-suffering patience and hopeful humor...)

Email ThisBlogThis!Share to TwitterShare to FacebookShare to Pinterest
Labels: #ACSSanFran, fun, Pinky and the Brain