A slate on Slate, a frustrated man next to a frustrated organic structure. The title?
"Teaching the Teachers."

What's that Crud in My NMR Sample?

The reaction finished in 20 minutes by TLC. You grabbed a quick aliquot for LCMS; one peak! Quickly, you quenched, extracted, perhaps pushed through a silica plug for good measure. After concentration, a gorgeous white powder formed, so you pulled high vac for 20 minutes and rushed down to "get your proton on." But, darn it! Still wet with traces of, well, something...

Friends, has this ever happened to you? Trace impurities in otherwise perfect spectra lead to much head-scratching and SI docs labeled "final product_spectrum 5."

The three papers linked to this post should help.


If I were joining a synthetic lab this year, or starting an internship / work-study, I'd download 'em all and thumbtack liberally to the back of my bench. Guaranteed utility.
Posted by See Arr Oh at 1:02 PM 35 comments:

Sometimes great science means changing the view outside your office lab windows.
(Bonus: This usually comes with a new title and some filthy lucre, too!)

The people have spoken: last year's list has grown ungainly, and so it's time for a new batch.
Same rules apply: If you hear of a move, tell me in the comments, and I'll post in the "Pending Confirmation" section. Escape from pending purgatory involves sending me a link or other documentation from the new institution. Fair enough? 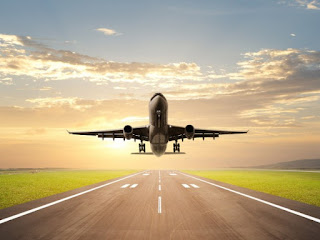 WWGS: What Would Gmelin Say?

Earlier tonight, I happened across a yellowed, dog-eared copy of The Rise and Development of Organic Chemistry, the 1894 opus* of Carl Schorlemmer, finished with help from his colleague Arthur Smithells. I didn't get a chance to read it cover to cover, but I appreciated a pithy quote in a postscript, purportedly an exchange between two chemistry heavyweights:


"When in 1829 it was found that pyro-uric and cyanuric acid were identical, Wöhler wrote to Liebig: 'Gmelin will say, Thank God, one acid less.'"

This, of course, in reference to Gmelin's attempt to gather the mid-1800s chemistry literature into a practical reference book. He would go on to create the Gmelin Inorganic Handbook, later to evolve into the Gmelin Database, part of modern-day Reaxys.

I appreciated the formal sentiment that pervades the text; certainly it's the first chemistry book I've seen that gives the reader a parting word after the index: 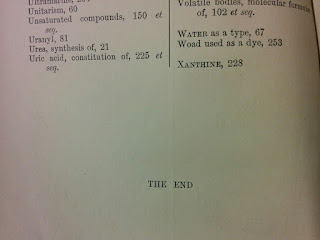 I'm sure I'll have more to say later on....there's some wild structures in this book, some that should give any serious bench chemist pause: 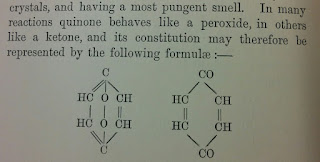