Update (July 1): Looks like we have some Lucky Sevens!*
Mean, Median, and Mode for the first 17 entries? Seven hours of sleep.

There's a 3.5-hour difference in start times.**
Interestingly, there seems to be a correlation between hours slept and arrival at work - longer sleepers show up later in the morning.***

*Sleep value (hours) taken at the lowest part of specified range.
**Morning start time pegged to center of specified times.
***Start time prior to 7AM: 5.75 hours; Start time after 9:00AM: 8 hours

Scientists: Does sleep help you, or hold you back?

I've read many recent articles claiming that "successful" writers, leaders, and inventors sleep less than the rest of us. I recently switched jobs, and that change - along with some biometric monitoring over the last month - has finally answered nagging questions about my sleep habits. But before I spill the beans, I'd like to pose three questions to you, dear readers: 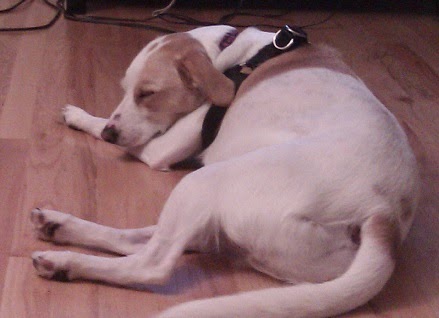 1. How much do you sleep each night?

2. What time do you start work?


Leave the answers in the comments.
Please be as accurate and honest as you can.
Looking forward to hearing from you!
Posted by See Arr Oh at 7:29 PM 29 comments:

Pretty sure this counts as an epic Google Ads failure...

Two regular readers have sent in chem-themed posters from different ends of the U.S.A.

Then this advertisement for Harvard Summer school, seen on mass transit:

Well, that's not something you see every day.

Courtesy of U-T San Diego* - with bonus Derek Lowe quotes! - comes talk of the University of Southern California taking over gobbling up "acquiring" the Scripps Research Institute. I'm sure we'll hear much more about the motivations as events develop, but the early suggestion involves cold hard ca$h - declining NIH funding paired with expiry of major pharma partnerships on the Scripps side, billions in fundraising** on the USC side. I've been hearing about salary squabbles and shrinking department budgets at Scripps, but didn't realize things had gotten to this point.


I don't see the press releases on either side that U-T San Diego alludes to,
[UPDATE 6/19 - Here's the releases!]
Perhaps someone on the inside of either institution knows more? seearroh_AT_gmail

*The guys who helped break the Nicolaou to Rice saga!
** I mean, they did just get all that money from Dr. Dre...
Posted by See Arr Oh at 7:29 AM 5 comments:

I've finally booked the tickets!
Excited to attend my first ACS Meeting in a looong while.

I'll try to tweet updates from a few of the sessions using the #ACSSanFran hashtag.

Look for me in the crowds!
(see registration photo at right)
Posted by See Arr Oh at 7:16 AM 5 comments:

Bacteria have always fascinated me; as an organic chemist, the dream of realizing new anti-bacterial medications always occupies a bit of one's brain. But what if we were able to harness more beneficial bacterial traits for synthesis? Obviously, fermentation broths produce many of our best molecules, but we don't always look at the other secondary metabolites - gases, for example - produced by bacterial metabolism.

Well, the Balskus lab at Harvard aims to change that perception. Their lab slogan? "Microbes are Nature's synthetic chemists." As reported in Angew. Chem. Int. Ed. yesterday, their lab has identified a biocompatible palladium catalyst that uses the hydrogen gas produced by E. coli to drive hydrogenation of a variety of electron-poor alkenes and alkynes:

This reaction takes place in aqueous culture, in the presence of oppressive concentrations of nitrogen and glucose, yet still produces decent yields (63-95%) of reduced products. One could argue with somewhat high catalyst loading (8%) and low reaction concentration, but as a proof-of-concept it's pretty cool. Bacteria produce hundreds of interesting volatile metabolites - among them sulfur dioxide, indole, and isoprene - and it'll be neat to see if more of these byproducts can be co-opted for synthetic chemistry.

Looking back through ChemBark's and my own surveys for new chemistry faculty, I'm a bit gobsmacked.

Unless I'm miscounting, 86 faculty were hired in the general chemistry space over the past year, and 86 again for last season. Now, I'm willing to admit that we haven't caught everyone hired over the past 2 years; heck, I'm even willing to suggest that the actual figure might double.

So, let's say that, according to our bloggy survey, 172 new faculty start every year in Chemistry-themed fields. Is that a lot? No, not according to the 2012 NSF Survey of Earned Doctorates. This study claims that U.S. schools graduated 2,418 Chemistry doctorates. Of those, only about half knew what they were going to do after graduation - their "definite commitment."

According to some more NSF numbers, almost a third of all physical science students go on to careers in "Academe." Perhaps this category catches new professors, adjuncts, non-tenure-track, and postdocs alike? (Leigh did this analysis much better than I!). For chemistry, NSF heard only 113 definite commitments in 2012 for non-postdoctoral academic employment. Even if we (generously) assume that they're all professors, that's only 5%!

Sadly, this number jives well with what our bloggy "New Hires" survey* captures. I'm seeing 7%, which is still a far cry from the 20% Ethan Perlstein suggests for the life sciences, or the NSF's 26% for chemistry.

Compare that against the 800 or so folks (33%) reporting postdoc landing spots. Or the 712 (29%) reporting that they're "seeking employment or study."
I guess professorships truly are the new alternative career.

-----
*I'm fully willing to admit that NSF has statisticians, education specialists, and a tried-and-true method, whilst we have folks chiming in over the Internets. Still, I'd be typing a lot more if I'd've received 600 names instead of just under 100.
Posted by See Arr Oh at 5:50 AM 6 comments:

Readers: Do you recognize that acronym?

Hint: It's a reaction related to RCM, with a taxane twist...

I've seen some strange nicknames in the organic literature, but this one takes the cake. How do you even pronounce it* in casual conversation? Is muttering "R-C-D-E-Y-M" actually more efficient than saying its real name?

If you're truly stumped, click here or here for an answer.
Posted by See Arr Oh at 7:00 AM 5 comments:

How would you go about making this compound?

Taking a casual glance, I'd offer up at least a few disconnections. An epoxide-opening cascade, starting from that alcohol in the lower left hand corner. Maybe make the oxazole last, after some funky bismuth rearrangement chemistry. Perhaps you think you could stitch together the middle with some new-wave aryne technology?

No, not the golf club, but di-iron nonacarbonyl. This dimeric "precatalyst" is thought to dissociate under the reaction conditions to Fe(CO)4, an unsaturated iron species that can complex to a variety of pi groups. It's been used for the Pauson-Khand for about 20 years, but the Williams group uncovered a new wrinkle last year: according to calculations, the iron might be initiating at the allene using a 3-membered metallacyclic ring!

Using these results, the Williams group mentally unzips the cyclopentane to this retrosynthetic intermediate (right). This wasn't the first thing they tried - that MOM ether on the oxazole came only after brominated versions of the heterocycle kept falling apart. Amazingly, the diiron complex ignores the alkyne, oxazole, and the MOM, choosing instead to complex to the end of the allene. Alkyne complexation, CO insertion, et voila! Cyclopentanone, coming right up (61% yield). Three more steps (deprotection, Swern, and base-promoted cyclization) produce the desired four-ring core.

'Tis the season for chemistry faculty to pack up their U-Hauls, distribute plane tickets to the post-docs, and relocate their labs halfway across the country. 2014's shaping up to be not much different from previous cycles.

For this year's moves, I'm adopting the ChemBark format, picking up roughly where he left off.

**Know of someone missing? Let me know in the comments!

Whilst researching the new faculty moves for 2014, I came across a bevy of interesting stuff...

Negishi's Bronze Bust unveiled at Purdue. Unlike politicians, religious leaders, or football heroes, I'm sure the number of chemists honored this way could be counted on two hands.

Apparently, I'm the last person on the globe to see the (now-defunct) blog Sexy Science.
(Hey, they named Phil Baran an 'up-and-coming star' waaaay before MacArthur did!)
Posted by See Arr Oh at 11:32 AM 3 comments: