Who's Your (Science) Rock Star?

After I posted earlier on Joe Perry's bare-chested R.S.o.S. adventures, an interesting discussion crept up on Twitter. Let's say you had a scientific charity approach you for a lab photo shoot. Who would you want to invite? Chemjobber has already weighed in here. Personally, I trend towards more eclectic acts, so I'd be inclined towards TMBG (they did write a song about nuclear fusion, after all...).

So, readers, who would you like? More 'arena rockers' like Bon Jovi or KISS? Perhaps a socially-conscious musician like Bono? Classical, perhaps? (I think Yo-Yo Ma would look great in goggles). Or maybe someone more modern, like Will.i.am or Lady Gaga?

Voice your choice in the comments. Thanks!
Posted by See Arr Oh at 11:27 AM 14 comments:

I'm not usually up-to-date on the latest GQ, but something caught my eye as I thumbed through the December issue: Joe Perry, lead guitarist of Aerosmith...in a lab coat.

Apparently, Mr. Perry donates his time to a charity - Rock Stars of Science - sponsored by clothier Geoffrey Beene. Along with other artists, they sponsor cancer research at Memorial Sloan-Kettering Cancer Center. The grantees, naturally labeled "Rock Docs," have received substantial funds via this venture: G.B.'s website claims $126 million since 2006!

While the fan in me says "Awesome," the safety-conscious chemist cries out: where's Mr. Perry's PPE? No goggles? No gloves? No hair ties? To risk sounding prudish, bare chests and chemicals don't exactly mix. Sure, it's a posed photo-op, but hey - when a VIP visits a building site or machine shop, they force him into glasses and construction helmets, right?

Well, I suppose it's for a good cause, and if the idea of guitar gods getting involved with basic cancer research gets the general public excited, I'm all for it.

*Update: Apparently CENtral Science blogged this all the way back in 2009.
Posted by See Arr Oh at 9:42 AM 17 comments:

I know I do! But that's not the only reason I'm donating $25 to Prof. Ethan Perlstein's Crowdsourcing Discovery project. In the States, today usually marks the start of the fevered Christmas shopping season - 'Black Friday' - so if you can afford to drop $200 on a laptop, or $500 on a flat screen TV...why not $25 to support science?

I know the arguments:

"Others will give, so I don't need to"
"I don't like the idea of supporting research into illegal drugs"
"So little money ($25K) can't possibly make a dent into real science"
"I already give to other charities"

OK, I hear you, but let me try to convince you. When's the last time you spent $25 on a single purchase? I'd guess that you bought an article of clothing, maybe some DVDs, or perhaps a lunch out? So...why not science? This money goes directly to research. No middlemen, no agencies, just scientists, equipment, and radioactive amphetamines!

Take the long view: As scientific funding becomes tighter for early-career academics and Fellows alike, this funding mechanism will play an ever-increasing role in supporting risk-takers and entrepreneurs. Look at the winners thus far on Indiegogo, Kickstarter, or RocketHub. Watches? Albums? Clothes? I say it could just as easily be Microscopes, Cells, and Chemicals.

Just in case your thumb locks up from excessive scrolling, I've pasted the project link here one more time. And I'll give Ethan's group the final word:

"Short-term rewards: the thrill of discovery, for us and for you.

I wrote this post for the #foodchem carnival, hosted at CENtral Science. Thanks again, Rachel!

Ahh, November! Chilly winds, smells of wood smoke in the air - along with the start of the NFL season - mean it must be near time to celebrate Thanksgiving. Don't know about you, but this season calls to mind three heartwarming, folksy tunes:


1. "We Gather Together," almost the banner song of the Pilgrim Hymnal.
2. "Alice's Restaurant." Yes, it's hokey and hackneyed, but darnit, it's a tradition! And #3...

Are you going to Scarborough Fair?
Parsley, Sage, Rosemary and Thyme |
Remember me to one who lives there
She once was a true love of mine.

Simon and Garfunkel, 1966 (and a bunch of Scots-men* and -ladies afore that). The haunting imagery of so many aromatic spices brings me back home: warm cardamom, sweet cinnamon, dark clove, tangy lemongrass. Certainly chemistry enough to wet your whistle: each spice carries a wealth of compounds to cure whatever ails you. Rosmarinic acid (sage, rosemary) for neuroprotection, thymol (thyme) to ward away bugs, trimyristin (nutmeg) for skin creams, or menthol (mints) to dull the pain.
Speaking specially for the parsley (one of my favorites), I can tell you that its dried leaves contain more iron than just about any other spice; we verified this by thiocyanate titration in undergraduate lab. Since then, I've admitted to placing parsley on just about every food: breakfast, lunch, or dinner.

Every decade seems to have a spice of choice for the medically inclined. Ginseng (memory loss) ruled the eighties, followed by curry powder (anticancer) in the '90s, then green tea and later pomegranate juice (antioxidants). Well, make way for a new spice on the block: moringa. According to this month's National Geographic, moringa leaves, which hail from India, may pack more nutritional punch than any of your standard spices - high in iron, calcium, potassium, even protein. I'll wait 'til I see it on menus at local restaurants, but it's always fun to speculate what the next "in" food will be.

A restful and Happy Thanksgiving to all.

*It's come to my attention in proofs and comments that the song in fact hails from Yorkshire (Northern England), meaning I've just alienated roughly 1/4 of the British Isles. My sincere apologies; perhaps next time Simon and Garfunkel reunite, they can sing Loch Lomond or something....
Posted by See Arr Oh at 12:16 AM 35 comments:

On the Air with CJ

Over the weekend, CJ and I got together on some podcasty goodness. We recapped the high points of the last ACS Webinar: Doctoral Glut Dilemma: Are There Solutions?

Go on over to Chemjobber to listen to our logical leaps, witty repartee, and bon mots. Tell us, who do we most resemble on air? Howard Stern and Robin Quivers? Robert Siegel and Melissa Block? Hannity and Colmes? Rocky and Bullwinkle?

I mentioned before that I work for a tiny company; we're bigger than 'virtual,' but smaller than the Dirty Dozen. Recently, I passed my first anniversary at this gig, and, inspired by Alison Frontier's "Not Voodoo" site, I decided to recap our wild and woolly first year. All stats refer to myself only, unless otherwise specified.

Back in graduate school (*cough* ages ago), I distinctly recall looking forward to the annual announcement of the Division of Organic Chemistry (DOC) Graduate Fellowships. The competitive awards, which require advisor recommendations, essays, and a pretty slick research record, granted the lucky few a full year's stipend along with travel funds to attend the National Organic Symposium.

When I clicked for the 2012-2013 crew, I felt something was missing...where's all the fellowships? I counted only eight grantees. Not to condemn them; their research certainly merits the award, but didn't the DOC used to give out a whole pile more?

In a word: yes. Here's the historical data for the grantees, taken from this website. 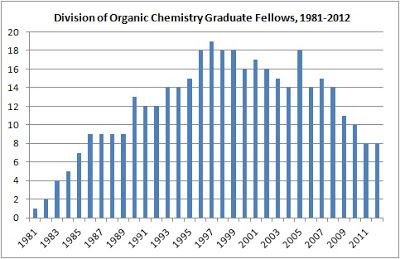 1. Lines, lines: It's not an accident that the trend mirrors the overall economy generally, and employment in Big Pharma specifically. Note the huge uptick in awards between 1997 and 2001, when the average was ~18 per year. Boom times. It's since settled down to just about 8 annually, around the average of the recession-era '80s.

3. Strange birds: Since graduate school enrollment has dramatically increased, at the same time as fellowships have decreased, these awards become even more prestigious, if only by dint of rarity.

4. Peak Perfection: Let's look at the top year: 1997, when 19 fellows were named. Who sponsored the awards? Take a trip down memory lane...

Wow, how many of those guys even exist anymore? Contrast this list with the 2012 crop:

5. Winners? Losers? Some auspicious names have been missing from the DOC Fellows' list in recent years: Harvard, MIT, Scripps? Actually, the trend improves for state schools, with 5/8 in 2012 going to the public universities. Compare this to 1995 ("boom times"), when the list included Harvard (x 2), Stanford (x 2), Johns Hopkins, Northwestern, MIT, Yale, USC, Chicago, and the publics represented by Berkeley (x 2), Wisconsin (x 2) and Utah.