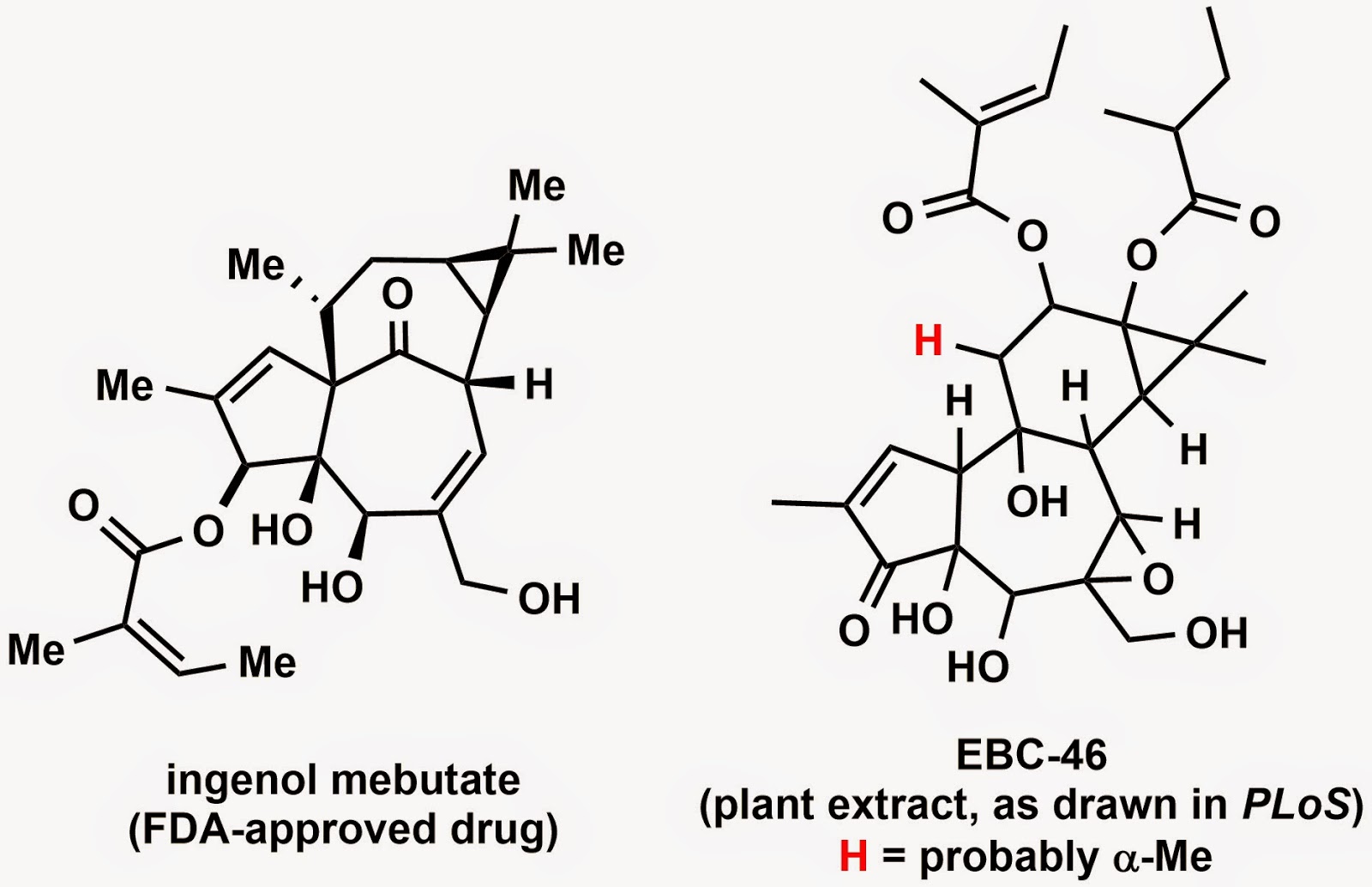 Digging down to the PLoS One article behind the research, I uncovered the drug's structure and proposed mode of action. Now, where have I seen a compound like that before? Oh, right! Ingenol. Both compounds belong to the phorbol ester family, and both appear to activate protein kinase C, spurring tissue necrosis and tumor shrinkage when directly injected into mouse skin cancer lesions.

The authors indicate that they're preparing GMP product for Phase I human trials; whether that's derived from magical rainforest berries - or just plain process chemistry - hasn't been disclosed.
Stay tuned.

--
*The published structure doesn't match the molecular weight (562.25 g/mol) the PLoS authors suggest, and no stereochemistry is specified. I'm guessing it's structurally similar to phorbol, and I've gently highlighted in red a hydrogen that's probably supposed to be a methyl group.

Charlie, Mac, Dee, and Dennis, the self-involved social group of FXX's It's Always Sunny in Philadelphia, would never advocate cautious, logical behavior as the best way to approach a situation. The dark humor that inevitably follows their ill-advised actions propels the show.

With nine seasons on the books, nothing's really changed. In the recent episode "Flowers for Charlie" - likely an homage to the late Daniel Keyes* - two scientists approach slightly-below-average Charlie with a pill ("a cerebral enhancement formula") to increase his IQ. Look at the chemical structures on those chalkboards!** Would you take medicine from these men?

---
*If you've never read "Flowers for Algernon," don't walk - RUN - to your local library and grab a copy.
**They're like prehistoric whiteboards.
Posted by See Arr Oh at 9:04 AM 10 comments:

Somehow, I don't recall seeing this gem anywhere on the chemblogosphere...

--
*And, lest we forget, former CEO of Searle Pharmaceuticals - poetically apt, here?
Posted by See Arr Oh at 9:54 PM 7 comments:

Earlier tonight, while combing through the ASAPs, I came across an interesting situation:

This paper (http://t.co/VHLzS2HbOO) seems to suggest that Chris Walsh (http://t.co/JfvajzKoyH) is now at Stanford. Can anyone confirm? #move
— See Arr Oh (@SeeArrOh) November 11, 2014


Usually. the chemblogosphere catches major moves fairly fast, but have we missed this one? Perhaps this is a "courtesy appointment," though I can't find any mention on Stanford's site.

Occasionally, readers will send me funny pictures that somehow capture the chemistry cultural zeitgeist. Here's some from the last few months:

Heartfelt thanks to everyone who sent one in. Keep 'em coming!
(seearroh_AT_gmail)
Posted by See Arr Oh at 10:40 PM 7 comments:

Who does more important work: The scene-stealing front man, or the patient show-runner backstage?

Writing at the New York Times "Motherlode" blog, author David Zweig posits that, in an era of attention-grabbing occupations - Internet whiz-kids, Wall Street financiers, American Idols - the real winners may be those who select the quiet, thoughtful "enabler" roles behind the scenes. He claims that, though they may not get the glory, such "Invisibles" end up better paid and more highly satisfied with their chosen stations.

If you get a chance today, think about the Invisibles that help your science to succeed.
And buy that mass-spec guy a beer, already!
Posted by See Arr Oh at 9:50 PM 7 comments:

For those keeping tabs on K.C. Nicolaou's potential career capstone, the group has published another fragment (QRSTUVWXYZA') of the ladder polyether maitotoxin. By my count (and thanks to their handy graphic, below), they've now formed 30 of the 32 requisite rings, meaning we'll likely see a completed total synthesis in the next few years.*

When Nicolaou's group announced the move to Rice, one of my first thoughts was "who gets to personally chaperone the maitotoxin fragments to their new home?" I'm picturing combination-locked black suitcases handcuffed to postdocs' wrists, but perhaps the samples just went in the back of a U-Haul truck with all the other lab equipment.

Happy Friday,
See Arr Oh
--
*Assuming they can work out the ring fusion and selective sulfate chemistry - not trivial tasks by any means!
Posted by See Arr Oh at 6:48 AM 14 comments:

A small part of me remembers a time before journal articles could all be accessed online. Back then, the cover art -- a creative expression of some of the newly-reported research between the covers -- could swing you towards one journal over another as you milled around the musty library stacks.


Nowadays, we've lost some of that artistic tradition, save for notable standouts Nature Chemistry and Angewandte Chemie. Hence, my confusion when looking at this week's Angewandte cover art - does anyone understand what's going on here?

Best I can tell, this graphic is a nod to Prof. Younan Xia's excellent overview of the benefits and risks inherent to nano-scale research. But the graphic appears (to me, anyway) to resemble two angry Pokemon fighting over the sword from Legend of Zelda. About the only chemistry I see? Blink, and you'll miss it: along the blade are five tiny emblems meant to represent common nanostructures such as carbon nanotubes or micelles.

Readers, am I missing something obvious here, or does this not really communicate the depth of Prof. Xia's review issue?