Here's a picture of our work fridge: 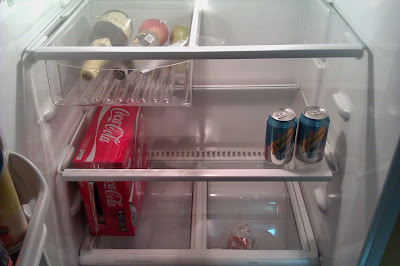 No, we didn't just clean it out; this is how it's looked all week. Amazing how little it's used when the company only employs a handful of people.

That seltzer on the right? The boss's. Ditto the hard lemonade in the drawer. The Coke? The part-time facilities guy. I don't even know who owns the bruised fruit.

The champagne, however? That's mine. Relic of a more optimistic era - I was going to crack that when we won our first big contract.

Been sitting there for over a year.

Bench chemists know it's tough enough to control the multiple variables that go into any one reaction. But what about the ones you never saw coming?

In yesterday's post, a volcanic mudpot-dwelling bacterium flourished in lab culture, but only when its growth media was doped with a rare earth element (REE). The authors had quite a bit of trouble eliminating residual metals from the growth media:


"When testing REE dependency (salts > 99% pure), it was observed that standard serum bottles resulted in a highly variable growth. . . Sand is one of the major raw materials of glass and may contain considerable amounts of REE, and Ce may be used as an additive during glass manufacturing. It was concluded that REEs in glass are extractable, at least partly, by the acidic media used."

Whoa! I confess, I've stirred hundreds of acidic solutions in glassware of all shapes and sizes, and never once have I assayed the rare earth content! And the glass wasn't the only cause for concern:

For those playing at home, some of these trace metals guest star at the ppm level in this media. Due to the materials used in glass and disposable needle manufacture, I guess there will always be a baseline of (potentially active) metal contaminants in acidic solution.

Want to take bets that one or more play roles in our favorite cross-coupling reactions?
Posted by See Arr Oh at 9:28 AM 14 comments:

Fascinating news for the inorganic biochemistry fans out there: Scientists have ID'd a bacterium (Methylacidiphilum fumariolicum) living in highly acidic volcanic pools that seems to use rare earth metals in one of its enzymes. A multinational team modeled the enzyme with a variety of rare earth cores, and the bacterium appeared to selectively take them up in cell culture. Cool!

My crack online reporting team has scoured the manuscript, finding only mentions of a mysterious Ce(III), along with triply-oxidized La* and Pr. Nowhere in the Supporting Information do they mention reagents used, and the reporter has confirmed that this subject wasn't broached.

Given the other salts the researchers added to the media, it's likely that they used either cerium (III) sulfate or cerium (III) chloride. However, Sigma-Aldrich sells no less than 10 different cerium (III) salts (Strem has over 20!), and I'm willing to bet they have markedly different bioavailability, oxidation potential, aqueous solubility...the works.

Readers, does anyone know what the cerium source is in this paper?** I certainly don't wish to draw unwarranted conclusions, but we're all still touchy over another recent dust-up having to do with a miraculous trace element.

Please let me know in the comments.

*IUPAC police: Throughout the paper, the authors refer to "Ln ions." Do you suppose they mean La (lanthanum)? Are elements abbreviated differently in other places?

**Interestingly, the authors note that their acidic growth media leached trace rare earths out of the glassware. I've never looked at that as a reaction contaminant, but I guess I'll have to start!
Posted by See Arr Oh at 4:48 PM 12 comments:

As my tiny company hovers on the brink of non-existence, I recently passed my second-year employment anniversary. Here's how the numbers shake out for 2013:

As reported by NPR this morning, the U.S. Supreme court hears the case of Carol Anne Bond, convicted of violating the Chemical Weapons Convention through her repeated attempts to poison her husband's mistress with two industrial chemicals. From NPR:


"Bond stole toxic chemicals from the chemical manufacturing company where she worked and ordered other chemicals over the Internet. She combined the chemicals into a compound that is potentially lethal in small amounts — and is also bright orange. Bond spread the toxic material on her rival's mail, mailbox, front doorknob, car door and other surfaces.

But because of the orange color, the mistress, Myrlinda Haynes, easily spotted the chemicals and avoided any injury except a thumb burn."

I tried to look for information on the identity of this "bright orange" substance. Digging into the SCOTUS brief, it seems Ms. Bond purchased two chemicals:

". . .petitioner [Bond] decided to punish Haynes. She purchased some potassium
dichromate (a chemical commonly used in printing photographs) from Amazon.com, and stole a bottle of 10, 10-chloro-10-H-phenoxarsine (an arsenic-based chemical) from her employer. Petitioner knew the chemicals were irritants and believed that, if Haynes touched them, she would develop an uncomfortable rash."

According to this oral argument from 2011, Ms. Bond had been a microbiology technician with Rohm & Haas, from whom she nabbed the arsine compound. What I haven't been able to figure out from the stories or briefings is whether she intended the combination of two potentially poisonous, irritant substances to function apart, or to perform some sort of solid-phase oxidation to, for example, phenoxarsine oxide (a known antimicrobial compound).