I've spent a bit of time this week trying to grok the ever-expanding frontier where biology meets chemistry. RNA therapeutics, chemical probes, synthetic biology, protein engineering...I could go on and on. Of course, this list would be woefully incomplete without the new cool kid: CRISPR.

If you've read a few of the stories surrounding this field's origins, you'll recognize the names Doudna, Charpentier, and Zhang. An interesting story arc emerges in the countless biographies surrounding Feng Zhang, now at MIT / Broad. Here, it's retold through the lens of WIRED author Amy Maxmen:

"Soon after starting [at the Broad], he heard a speaker at a scientific advisory board meeting mention Crispr. 'I was bored,' Zhang says, 'so as the researcher spoke, I just Googled it.' Then he went to Miami for an epigenetics conference, but he hardly left his hotel room. Instead, Zhang spent his time reading papers on Crispr and filling his notebook with sketches on ways to get Crispr and Cas9 into the human genome. “That was an extremely exciting weekend,” he says, smiling."

Have you ever had a point in your life like this?  Perhaps Zhang truly found the conference boring, and researching CRISPR was his best escape. However, since this story crops up so often, I'd like to think it's an attempt to capture the "flow" state as it applies to crystallization of a new field of research or career direction. Hopefully you recognize the feeling - total immersion, loss of time, tuning out all external concerns while your brain opens up to the vast possibilities of something truly new.


From my own experience, I can remember a handful of flow moments that I sustained for longer than a few hours. In the first, I spent two or three days reading everything I could about a competitor's catalysis research - hoping not to get scooped - and encountering multiple exciting ideas about monodentate ligand binding left unexplored. In another, I tried to track the entire Vinca metabolism from Tryp to the few hundred polycyclic alkaloids like vincristine and ajmaline. Plant metabolism turns out to be much more complex than I'd ever imagined.

Readers, I'm certainly not alone...can you recall when you've experienced a version of Feng's Miami moment? What was it like?
Posted by See Arr Oh at 11:02 AM 18 comments:

Saw this "promoted Tweet" go by on the Twitterz earlier this evening.
But something just didn't add up.

Can you spot the problem? 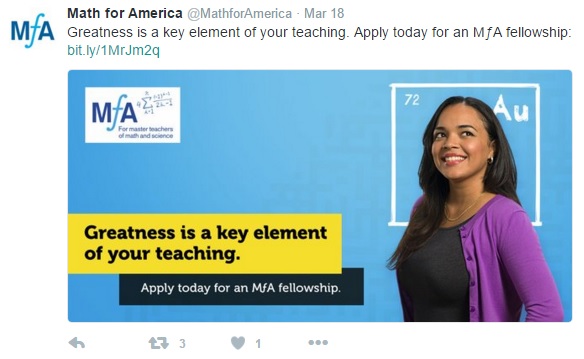