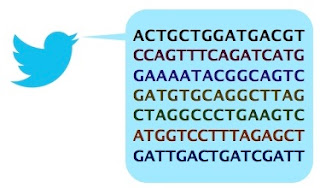 Live-tweeting all 3 billion bases will require 21.4 million chunks of ~140 characters each. To speed the process, Venter has invented a new method dubbed 'shotgun de-sequencing,' which will break the full genome into tiny pieces for efficient online consumption. To facilitate distribution, their plan involves sequence amplification by PCR, Perfectly Choreographed Re-tweets.

To ensure the full code hasn't been compromised, a variety of intelligent scripts and bots will check tweets for overlaps or errors, just like real (biological) DNA replication would. Collins suggested some tongue-in-cheek designations for these programs: "typase," "editase," "deletase." Venter, proposing more processing power, suggested "IBM's Watson could have a crack at Jim Watson...well, at his DNA, anyway."

Funding for the project has not been fully secured. Said Venter: "You know, with all the new technology we'll have to develop just to tweet this genome, we'll consider asking NIH for financial support..."

Quipped Collins: "In this grant climate? Forget it."


Note to the humorless: This is fake. Happy April Fools' Day. Please don't sue me.
Posted by See Arr Oh at 7:33 AM

Email ThisBlogThis!Share to TwitterShare to FacebookShare to Pinterest
Labels: Check the Date