A few nights ago, a random Twitter encounter led to a fantastic email submission from Jim Leahy, who goes by @usffan. As Jim points out, the Sean Connery vehicle Medicine Man contains some laughable chemistry moments (note: I've lightly edited for style and linkage, but it's otherwise untouched):

When I saw See Arr Oh’s #ChemMovieCarnival, the first movie that popped into my head was Medicine Man, a 20-year old movie that I recall prompting many belly laughs.  To set the stage, this is how Netflix (which rates it as a 3.5/5 star movie!) describes it: 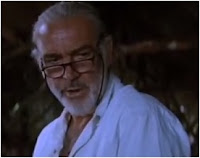 “Reclusive scientist Robert Campbell (Sean Connery) discovers a flower extract in the Amazon rain forest that cures cancer. He tries to duplicate the life-saving formula, but clear-cutting developers and American bureaucrat Dr. Rae Crane (Lorraine Bracco) hinder Campbell’s efforts. When a native child falls ill, the scientist must decide whether to save one life with the last of the serum or keep it for further analysis.”

James Bond AND a flower extract that cures cancer?
What could possibly go wrong? (well, other than not wearing protective eyewear?)

I was disappointed to find that Netflix doesn’t offer the movie online, and when somebody pointed out on Twitter that Derek Lowe’s very first post on In the Pipeline was about this movie, I thought about just skipping it. Fortunately, I found that the entire movie exists onYouTube, and decided that it really needed to be a part of any #ChemMovieCarnival.

For the sake of anybody who wants to watch the movie, I’m not going to spoil any significant plot points. This is just about the “science.”

The two scientists involved in the movie are a botanist (Robert Campbell) and a biochemist (Rae Crane) who has “degrees from CCNY, Berkeley and Cambridge and is the only person to win the Thurman Award twice.” Campbell has been working in the Amazon rain forest for years, being supported in his research by Aston Pharmaceuticals and has asked for a new research assistant as well as a gas chromatograph. Crane makes the significant journey into the rain forest (including a pretty extensive hike and a canoe ride) with the GC in tow to reach Campbell’s makeshift lab (presumably, vendors such as Agilent and Perkin-Elmer don’t ship to the rain forest!). When Crane arrives, it’s night time and Campbell is pretty hammered (no telling if the drinks were shaken, not stirred). So Crane sleeps for the night under a tree. This is where the scientific fun starts.

The next morning, when she wakes up, she discovers that Campbell is starting to unpack the instrument, which he miraculously has up and running within minutes. My first thought was “wait, what are they using for carrier gas?” although later in the movie there’s a shot of tanks and regulators (AirGas apparently does deliver to the rain forest). After some banter, Campbell asks Crane “what am analyzing?” which she answers with the question “did you run a baseline?” Not sure how that would help answer exactly what Crane is analyzing, but it’s good to know that the biochemist is keenly aware of standardizing the instrument. And what an instrument it is!

Campbell has injected a sample into the GC, a partial trace of which looks like this: 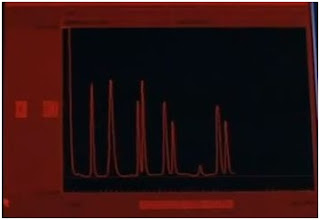 As Crane starts to examine the chromatogram, she discovers that nearly all of the compounds are “known” 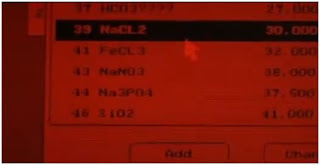 For those of you who understand gas chromatography, you know that a basic requirement is that compounds have to be sufficiently volatile that they can be converted into the gas phase before they can be analyzed for retention time along a column, which makes the instrument’s ability to vaporize silica, sodium phosphate, sodium nitrate and ferric chloride pretty remarkable, especially in light of the fact that it’s an older model GC. Frankly, I’m much more impressed with the compound coming off as peak 39. Remember, these are all the unremarkable “known” compounds, according to Crane. I’m pretty sure finding NaCl2 at all, let alone in nature, would be worthy of publication in Science or Nature. Which is when you start thinking “wait, how are they identifying these compounds?” Remember, this is just a GC – what kind of detector are they using that identifies all of these inorganic compounds? We’ll come back to that…

Campbell seizes on the words “nearly all,” which leads them to focus on peak 37, which isn’t apparently “known." 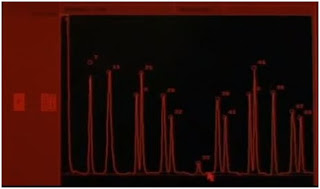 Clicking on the peak reveals the structure of peak 37 to be: 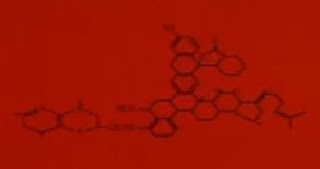 Sorry, I couldn’t get it to come into focus any better than that, but it’s the best view of the entire molecule in the movie. They do have a partial shot that allows a little better view of some of the details:

Where to start! Apparently this GC has the ability to determine structures of unknown natural products, which would really come in handy, although to be fair, it doesn’t seem to be able to distinguish stereochemistry, and I count at least 8 stereocenters in this partial shot of peak 37. Then again, those stereocenters are insignificant compared to the two Texas carbons in the bottom ring. Crane marvels that “it’s an acid derivative,” which I can only assume refers to the side chain that’s partially cut off in the close up but appears to suggest that the alcohol (which may be stereocenter #9, by the way) exists as a bicarbonate. Campbell’s only concern is whether it can be synthesized, to which biochemist Crane replies “uh-uh, it’s Mother Nature’s kitchen sink.” Apparently the biochemistry program at Cambridge includes an extensive synthetic organic chemistry component.

It turns out that peak 37 appears to be the “cure for cancer.” I would sure love to know the pharmacokinetics of this compound which may be competitive with the least Lipinski-like small molecule to be considered for clinical trials. Lots more scientific comedy ensues, such as the ability of a botanist and a biochemist to apparently diagnose lymphatic cancer, but a few highlights include their formulations expertise at finding a suitable injectable of the extract and the stunning response time that comes from a single dose of 37. I also suspect that the FDA would not take kindly to the human testing of most assuredly non-GMP material.

None of this should keep you from watching the movie (although the 24% on Rotten Tomatoes might), and I suspect that there’s lots more scientific comedy to be mined here. Either way, it deserves a special spot in the #ChemMovieCarnival.