I can't believe I got back from New Year's without finding a single post on ouabagenin* [wah-bah-jenn-in], the latest from Phil & Co. in Science this past week:

Ouabagenin, a polyhydroxylated (>5 -OH groups) cardenolide (steroid with an appended lactone) positive inotrope (helps heart pump more forcefully) had been completed only once before, in a 40+ step relay synthesis by Deslongchamps in 2008 (got all that?!?). Only a few mg were prepared, and those of you familiar with the Baran group know that the only real way to make natural products is with a shovel and bucket - gram-scale, baby!

So, we start out with 20 g of cortisone acetate - just one reduction shy of Preparation H - and two steps later have a fully protected version of adrenosterone. The group first tries a porphyrin-catalyzed C(19) hydroxylation (the bottom-left methyl), which doesn't work, so they opt instead for some fancy solid-state photochem to generate a cyclobutane ring, which selectively pops open with NIS under sunlamp irradiation.

Selective de-ketalization and iodide hydrolysis sets the stage for a three-step sequence (peroxide, SeO2, peroxide) to generate a diepoxide (right, top), a.k.a. the "most difficult transformation to secure on scale." They toss a "gamut of conditions" at the molecule, only to receive mixtures of enones. Finally, they find that using in situ Al-Hg amalgam (we're talking foil / scissors here!) combined with Sharpless "on water" suspension produces the desired triol, which they wrap up as an acetonide. 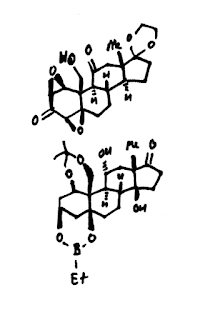 Next, "superhydride" reduction both reduces the ketone and protects - as a boronic ester - the remaining two hydroxyl groups. A little Saegusa-esque dehydrogenation, a fluorous solvent-enabled bond migration, and a Co-catalyzed hydration produces 'protected ouabageninone' (right, bottom).

Endgame - We're not out of the woods yet, folks! Conversion of that lone ketone into the vinyl iodide (hydrazine, iodine, TEA) followed by a modified Stille returns a butenolide diene. They again toss in a 'kitchen sinkful' of reductants, only to find that dicobalt-borane (cool!) followed by Barton's base (N-tert-Bu-TMG) produces the correct butenolide orientation (3:1 dr). A touch of HCl in methanol liberates the natural product.

Despite the fact that they report the last few steps on just 30-60 mg, the group claims that they have >0.5 g parked at the protected ouabageninone (vide supra). With this synthesis, Baran also alludes to the overall usefulness of his "redox-relay" strategy, which has certainly served him well before.

*Bonus - In the Scripps press release, Phil calls ouabagenin "probably the most polyhydroxylated steroid known on planet Earth." Billions of yet-undiscovered microorganisms could not be reached for comment.
Posted by See Arr Oh at 8:14 PM