I'll admit it: I was a bit bummed out to read B.R.S.M.'s tweet regarding Totally Synthetic's untimely demise:

As a young pup, I cut my teeth in a few guest posts over at Paul's place. Since I saw a sexy, streamlined version of one molecule go by in Org. Lett. last week, I decided to do a (memorial? celebratory?) post in true Tot Syn style.

Folks who've read the other syntheses might agree with me that the trigonoliimines, as drawn by Tambar, resemble a terrifying pterodactyl:
Both Tambar and Movassaghi aimed for asymmetric syntheses, and started from a [2,2] fusion point between differentially-functionalized tryps. They're aiming to make the whole lot (Trig A-C), so this semi-biosynthetic approach makes sense. But Hao's latest paper sets its sights squarely on (all together now!) the (6/5/7/5/6/6) core of Trig A - sadly, a much "flatter" molecule with less 'dinosaur' character. But, the target still shows moderate antiviral activity, so the group reasons a shortened synthesis may expedite analog generation. 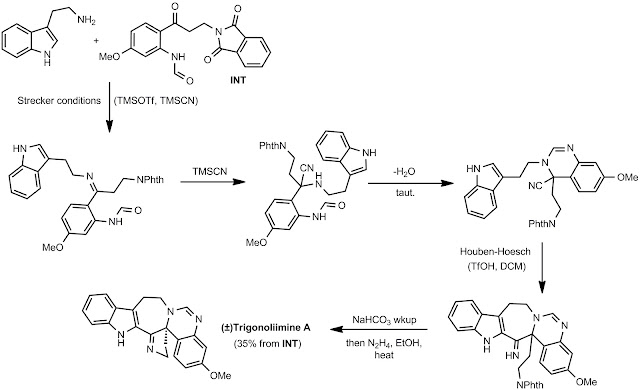 Initial TMS-promoted imine condensation with the aryl ketone sets up a CN alkylation, which cyclizes on the nearby formamide (probably through an isonitrile). Now here comes a 7-membered Houben-Hoesch ring closure, which they perform in a one-pot prep due to instability of the methoxy-Strecker intermediate. Basic workup, followed by hydrazine deprotection / cyclization, produces Trigonoliimine A, in a respectable 35% yield (4 steps, 3 pots).

Godspeed Dr. Docherty, wherever you are...

Update: Neil posits that Paul is still alive and well, and writing for Chemistry World.
Posted by See Arr Oh at 7:01 AM