Fight in the organic octagon long enough, and you're certain to come across boatloads of sigmatropic rearrangements. There's your classic [3,3] - Cope, Claisen, etc - the [2,3] Wittig, and [1,3] hydride shifts. Sometimes, interlopers crop up, like [4,4] and [5,5] shifts. Molecular modeling even lends support for a [7,7]!

But have you ever seen a [3,9]? Can you picture what such a system might look like? Well, Wegner, Kessler, and Neuburger (Basel) would like you to try. As they report in their latest JACS ASAP, they've posited a rather cool [3,9] to explain the products of a tandem IEDDA (inverse-electron-demand Diels-Alder) followed by a cyclopropanation:

Toss out everything you learned in second-semester organic. The authors describe an "...'allowed' supra-antarafacial [3,9]." This means that the oxygen atom of the putative dihydrofuran lets go from the "top" face, while at the same time the cyclopropane forms on the bottom. They've run calculations on the system, and metal-stabilized versions have been shown to react in similar ways. Heady stuff. 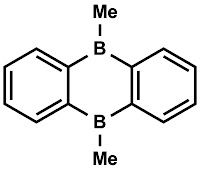 Even more interesting? The catalyst is a bidentate diboron Lewis acid. That's right: each boron atom grabs hold of a single nitrogen atom in the diazine to promote the D-A (You don't see that every day!) The authors make a tiny squeak at the end of their paper regarding possible future synthesis of 'unsymmetrical' versions of their catalyst. I bet that that'll be tough, given the proposed transition-state binding model - one ring flat, one sticking straight up at the incoming dienophile.

My guess? They'll likely try to hang a helically-chiral group on one side, or else staple a PHOX or Evans auxiliary on.