Dmitri Mendeleev had a good thing going. Not only did his periodic table allow him to predict the properties of "missing" elements, it also provided a future template for all sorts of pop-culture catalogues - from beer and QR codes, to chocolate and shoes. Even the universe has one! If you want to get really meta, there's even an online collection (wait for it...) a periodic table of periodic tables.


While researching an upcoming post, I encountered a few 'Periodic Tables of Music.' Here's one for jazz, and another for pop music. But what about a table where the atoms themselves compose the music?

Enter Mahadev Kumbar, an Adjunct Professor at Nassau Community College in New Jersey. I found his Musical Periodic Table in a 2007 article and associated lecture series written for the Journal of Chemical Education. 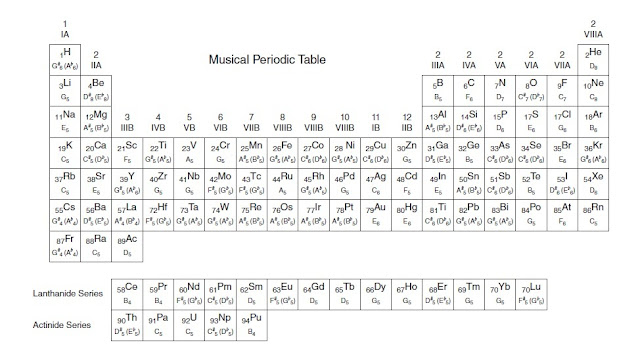 
"One (perhaps surprising) aspect of the natural world is that each and every process in nature—chemical or otherwise—produces some kind of sound, whether audible (20 Hz–20 kHz) or nonaudible (<0 Hz and >20 kHz), characteristic of that process. Those sounds, I believe, are the music that is the universal language of the natural world."

To construct his table, Kumbar grabbed a few lines from each element's emission spectrum. He then mathematically transformed the energies of elemental electronic transitions into characteristic notes played by each atom.