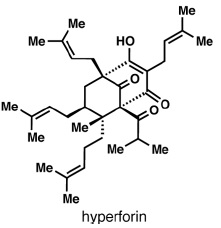 Kudos to the Maimone group (UC-Berkeley), who have published in JACS ASAP what seems to be the speediest synthesis of a hyperforin on record - just ten steps!

Perhaps this lends more credence to the Eastgate's "current complexity" index, which measures synthetic simplification over time thanks to improved methods. But who would have guessed that in just five short years this synthesis would telescope from 50 steps down to just 10? Strychnine, albeit a very different challenge, took nearly 60 years to simplify from 30 steps down to Vanderwal's highly-convergent six.

For Chemists: Steps of interest include a highly-oxidized [4+2] diketene cycloaddition, a iodoacetate-promoted ring expansion, and a highly modular synthesis widely amenable to analogue production.

For Everyone Else: Why should I care that this ungainly-looking molecule was made faster than before? First, hyperforin and related secondary metabolites (natural products produced by living organisms) isolated from famous folk remedy St. John's wort suggest new avenues for the treatment of of malaria and certain forms of depression. Second, if chemists can make variations on this molecule in roughly one-fifth the time, we can expect a venturesome start-up somewhere to begin fleshing out the SAR (what chemical modifications product what activities?) in record time.
Posted by See Arr Oh at 10:26 AM