Please see below for updates as I receive further information...

A few points about this story (emphasis mine): 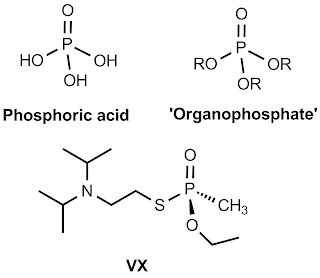 I'd be quite interested to know how the FBI field tests for organophosphate nerve agents (Sorry, Daily Mail, but VX, due to its high boiling point and viscosity, is actually not a gas but a thick liquid much like phosphoric acid). I'm aware of certain colorimetric pesticide test strips, and certainly blood chemistry assays for exposed individuals would tell the tale.

But could phosphoric acid give a false positive here? Its chemical properties aren't overall very similar to nerve agent. Unlike VX, phosphoric acid has acidic protons, rendering a much different reactivity and solubility profile. VX soaks deep into skin due to its carbon appendages - hence, organophosphate - which wouldn't really occur with the acid. Perhaps JFK sent a sample out for 31P NMR? This analytical technique would show a resonance close to that of VX, which might incite a high-threat response. Perhaps an LC-MS might also ring warning bells: both compounds should show a fragment around 94 m/z.
If I ever find organophosphate in my Coke can, I'm suing. That is, if I survive the encounter...

Organophosphates, to which VX, sarin, soman, and several potent insecticides belong, have alkylated (carbon-functionalized) bonds on their oxygen atoms. Once ingested or absorbed, they tend to interfere with acetylcholinesterase, an enzyme involved in neural signaling. The reporter perhaps meant to say "phosphorus compound" or even "acid," but unfortunately chose the wrong word.

One more thing: I completely understand the highly cautious nature of the law enforcement response. Organophosphates can sicken or kill at remarkably low doses, thus their unfortunate appeal as terror weapons. If any of my readers have experience with airport chemical detection, please write in to set me straight on your detection methods of choice.

*Update 2, 8/12/13 - Chemjobber points out, via Twitter, that the NY Post reported ordinary nail polish remover (usually acetone, or ethyl acetate / iPA) as the culprit. Now I'm even more confused as to how this triggered a nerve agent analytical read!

Update 3, 8/12/13 - Commenters on Reddit and JLC (thanks!) remark that airports have at their disposal DART-based benchtop MS, or perhaps Barringer IONTRAP ion mobility spectrometers. Another commenter suggests M8-M9 detection paper. Vibrational spectroscopy (Raman, IR, etc) has been bandied about as well.
Posted by See Arr Oh at 11:42 PM