Copper, copper, everywhere (and much more than you'd think). It's found in coins, wiring, statues, paints, and even as part of a balanced diet. Chemists, in particular, have long loved copper for its ready availability, well-defined redox states, and its wealth of reactions; just last week, Prof. Sherry Chemler (SUNY-Buffalo) recounted nearly 100 years of copper's catalytic successes* in a Science perspective.

Though scientists have long studied copper-catalyzed reaction, several short-lived, unstable intermediates
have defied characterization. Now, Profs. Craig Ogle and Steven Bertz (UNC-Charlotte) may have caught one of these ghosts: an elusive C=O copper pi complex. Using rapid-injection techniques at -100 degrees C, the team "freezes out" the complex, which they study by 2D NMR (which shows relative positions of various atoms) and cryoloop X-ray crystallography (shows absolute position in a fixed crystal lattice).

When the team warms the compound much above -10 degrees C, it immediately falls apart. 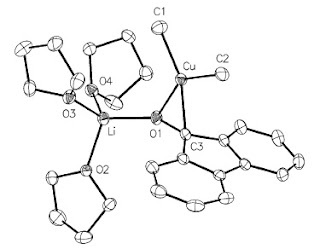 Isolating otherwise reactive intermediates lets us peer inside** the "black box" of catalysis. In this structure, the lithium atom tugs at the oxygen's lone pair, allowing the copper to slip into pi-coordination in a "side-on" fashion. Though it's tough to see from this picture (left), the authors point out that five atoms (O, C, Cu, Me-a, Me-b) all sit together in one plane, which validates earlier NMR models. Finally, there's some hints of reactive fate here, as the "bottom" methyl group shortens up, preparing to jump off the copper atom and onto the central carbon, while at the same time, the copper atom cozies up to the oxygen. Remarkable stuff.

* And that was just on one class of reactions!
**The deeper we look, the more crazy, head-scratching stuff we find. Ask your local organometallic enthusiast for more info...
Posted by See Arr Oh at 8:46 AM