You can't put your finger on it, but sometimes you just feel compelled to read a paper. This one, from Org. Lett. ASAP, scratched all the usual itches: protecting-group free total synthesis (check), traditional medicine (check), tropical diseases (check), and cool off-the-shelf reagents (check).

I must admit, Gordon Gribble's name at the top caught my attention, but his co-authors hail from the University of the West Indies, a school I've always been curious about.* 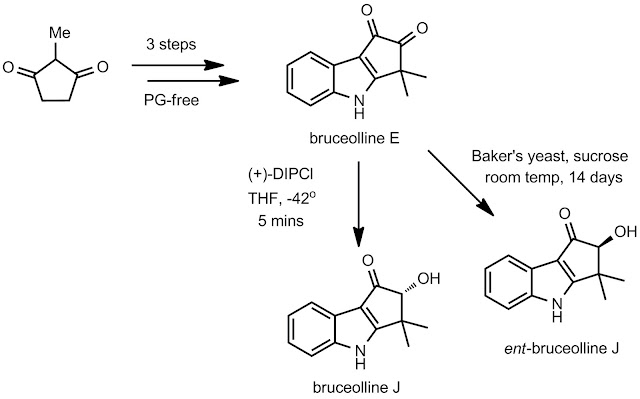 To access the final compound, Gribble & Co. must reduce just one of E's two ketones. The authors attempt borane reductions, but the "usual suspects" (CBS, Alpine) fail miserably. Optimization with (+)-DIP-Cl produces the final bruceolline J in high yield and ee. To make the unnatural enantiomer, the authors turn to a personal favorite: Baker's yeast, more commonly found in breads than labs. After 14 days in a warm, sweet slurry, the wee beasties return ent-bruceolline J in 98% ee.

The synthesis, only 4 short steps, should open the door to develop new antimalarial compounds.


*First, the Hawaii paradox - recruiting high-end, serious grad students to work 4-6 years in a tropical paradise. How does that work? And how do shipping delays from the mainland impact project selection? I can imagine that protecting group-free, relatively robust chemistry would have to be the norm, to survive storms, delays, humidity, etc.
Posted by See Arr Oh at 8:38 AM