Good evening. Earlier tonight, I read your change.org petition calling for a ban on Yellow #5 (tartrazine) and Yellow #6 (Sunset Yellow) in Kraft Mac & Cheese. I must say that, while not a mac connoisseur myself, I have certainly eaten it once or twice. Furthermore, I agree that all processed food companies should periodically review their popular brands, taking into consideration consumer sentiment, and should make every effort to produce quality goods.

Since your petition now has well over 230,000 signatories, I assume many in the general public agree with us. But I must know: Where did you source the scientific data for your claims?

Let's start from the top: 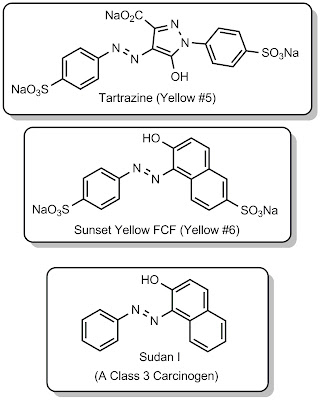 "Artificial food dyes...are man-made in a lab with chemicals derived from petroleum (a crude oil product, which also happens to be used in gasoline, diesel fuel, asphalt, and tar)."
Well, I can't disagree with the first part - they're certainly synthetic azo dyes. However, I'd like to discuss your second point, where you equate 'petroleum-derived' to well-known flammable, smelly, or oozy black 'chemicals.' These azo dyes don't really resemble the compounds you've mentioned at all - gasoline and diesel are long saturated chains of carbon atoms, while tar / asphalt are collections of polycyclic aromatic hydrocarbons (PAHs), which might resemble these dyes if you took just the naphthalene portion (right-hand side), deleted the "OH" group, and chained a whole bunch of 'em together.
Yes, azo dyes come from organic chemists (like me!) in a lab somewhere. But, you know what else comes from petroleum? Pharmaceuticals. Plastics. Cosmetics. Synthetic fibers. Coatings. Many of the modern materials you interact with on a daily basis.
"Require a warning label in other countries outside the US."
I believe the US also mandates (Code of Federal Regulations Title 21, section 74.1705) inclusion of tartrazine on labels - I've seen it listed on my mouthwash. (Incidentally, that same CFR page sets exacting limits on impurity content in these dyes)
"Have been banned in countries like Norway and Austria (and are being phased out in the UK)."
Are we just lifting directly from Wikipedia by this point?
"Yellow 5 and Yellow 6 are contaminated with known carcinogens (a.k.a. an agent directly involved in causing cancer)."
Now here's where things get interesting. Head on over to TOXNET, the National Library of Medicine toxicology database. I've looked up both Yellow 5 (tartrazine) and Yellow 6 (Sunset Yellow), and I can't find any positive studies suggesting carcinogenicity. Ditto both Wikipedia pages, and even my copy of the Merck Index (13th Ed., pp. 9091 and 9157).
What about the potential impurities, you ask? Sunset Yellow can indeed be contaminated with Sudan I (see picture, above), a non-sulfonated version of the compound. Sudan I lists as a Class 3 Carcinogen, which (thanks, ACS!) means "unclassifiable as to carcinogenicity in humans." The European Food Safety Authority (EFSA) actually re-evaluated Yellow 6 in 2009, declaring an acceptable daily intake and noting Sudan I contamination was well below the allowed limit for lead in processed foods.
I won't argue against your claims regarding hyperactivity and allergic reactions; the Hazardous Substances Databank (linked through TOXNET) indicates several studies in which patients do indeed respond poorly to artificial dyes. However, I will note that the responsive patient percentages are often low, and many weren't deemed statistically significant relevant to placebo.
I don't disagree with consumers' rights to petition companies for product changes. But please, check the science, lest you lapse into harmful chemophobia.
Thanks,
See Arr Oh

Update (8:00AM 3/15) - @thefoodbabe contacted me on Twitter with the following: "you are incorrect in your critique of our petition, I've got to go interview live with CNN now - Ciao"

Update 2 (9:00PM 3/15) - CNN posted two responses to the petition.
One leans scientific, the other mostly re-states the bloggers' objectives.
Posted by See Arr Oh at 12:39 AM