On Facebook and other social media sites, online petitions quickly gather steam. Users see others’ posts, rally to the cause, and spread word to their friends and families using “Likes” and “+1s.” However, this rush to join also belies a lack of judgment; as the petition becomes easier to circulate and sign, critical reading of its content diminishes.
Take the example of Tide Free & Gentle, a popular laundry detergent advertised as free from dyes and perfumes.  Political site change.org has recently posted a petition titled “Tide: Get Cancer-Causing Chemicals Out of Laundry Detergent.” This petition focuses on one specific compound purportedly isolated from detergent: 1,4-dioxane. As of March 6, it had amassed >68,000 signatures, just under 1 month after going live (I caught it making the rounds on both Facebook and Twitter).
The petition references data from a recent report, published online last November by Women’s Voices for the Earth, an environmental awareness organization based out of Montana. Dubbed Dirty Secrets: What’s Hiding in Your Cleaning Products?, the report aims to expose “hidden toxic chemicals” in household products, cleaners, and air fresheners (see here for P&G’s published Tide F&G ingredient list).
(Disclaimer: I am a chemist by profession, and I’m not advocating corporate secrecy or consumer harm. I’m just trying to critically analyze the data before making decisions.)
I think this post might function better as a Q&A.
Q1 – What is dioxane, anyway? Can it harm me?
1,4-Dioxane is a cyclic diether (2 oxygens, 4 carbons, 6-membered ring). Chemists use it to dissolve compounds for reactions. It possesses specific properties (chelation, high-boiling, water solubility) that make it attractive for certain reactions over other solvents. According to its MSDS, dioxane can irritate the skin eyes, and nasal passages, but only by acute (large amount in small timeframe) dose.
Q2 – Does it cause cancer?
Dioxane lists as a 2B – Possible Human Carcinogen.  Note the exact wording there. Two other levels exist for compounds known to cause human cancers, 2A (Probable) and 1 (Known Carcinogen). If you enter “dioxane” into TOXNET and browse the carcinogenicity data, you’ll find studies on rats where ~1.0% dioxane in drinking water caused liver tumors in many cases, also squamous cell carcinomas, and a single report of mammary gland tumors over two years’ exposure (Dirty Secrets mentions only breast cancer, and calls dioxane a “known cancer-causing substance”).
Q3 – Well, what did the report actually find? 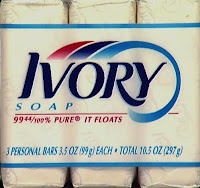 Good question. Page 10 of the report lists the data for Tide Free & Gentle, which indicates 89.00 ppm dioxane, and 0.8 ppm limonene, a fragrance isolated from citrus peels. Now, ppm? Parts per million, meaning that 89 milligrams are found in each liter of detergent. Put another way, if you round up to 100 ppm, it becomes one part in 10,000, or 0.01%. If you paid 0.01% sales tax, you’d pay $1.00 on a new $10,000 car. Remember the Ivory Soap ad, with “99.44% pure?” Relative to dioxane content, you could still state that Tide F&G was “99.99% pure.”
To compare against the animal data – 1.0% in drinking water – we’re more than two orders of magnitude (100x) off . . .and, last time I checked, most people don’t drink laundry detergent.
Q4 – But these are chronic exposures, so doesn’t it build up over time?
If the entire detected amount were to be absorbed into your body each time, maybe so. However, given dioxane’s high water solubility, and the large amount of water used to wash clothes relative to the tiny volume of detergent added, it’s likely that only a vanishingly small amount ever ends up stuck to your T-shirts.
Q5 – Tell me more about the science.
I thought you’d never ask! To start, the samples were analyzed at Analytical Sciences, LLC, in Petaluma, CA, using selective ion mass spectrometry. Theoretically, this selectively targets the ion of interest and increases the sensitivity of the instrument for this analyte. However, note the Limits of Detection (p. 15) for dioxane = 250 ppm. So, how are they accurately measuring below their L.O.D.? Where are the error bars, or ranges for multiple runs? No analytical chemist ever uses a single data point to prove an argument. Add in pseudo-scientific statements such as “analytical analysis,” and “very specific mass spectral ions,” and you wonder who Q.C.’d this report! The nail in the coffin, however, has to be the asterisks (***) that litter the analysis section, including these statements in tiny font, buried under the data:

*These measurements represent levels detected in laboratory testing, and may not represent actual exposure levels experienced with use of the product in the home…

***In most cases, research has never been conducted to determine if exposure to the chemical through use of the cleaning product is associated with the health outcome.

Despite the obviously inflammatory titles of the petition and the report, and the overwhelmingly negative bias towards all those “dirty chemicals” made by wily chemists, I can empathize: the petition addresses moms, and its message aims to keep children safe. I’m sure the scientists at P&G, many of whom have their own kids, want to keep children safe, too! However, in my opinion, this report should not be the ideological or scientific basis for thousands of social-media-equipped petitioners to vent their frustration.