Are You Scared Yet?** 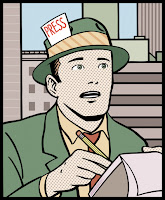 Sensationalist journalism pervades our society. Usually, investigators focus their attention on stores, local government, unions, and the like. But chemistry labs...are they terrorist plots waiting to happen? Lucky for us, ChemBark to the rescue! His post Friday (click over there to see the video in all its scandal-filled and melodramatic musical glory) alerts the chemical community to a pressing National Security emergency: unlocked research labs in otherwise nondescript academic buildings.

To reiterate Paul's main point: yes, the labs in question should not have been so easy to access. Most of the academic labs I've worked in have had key card / ID fob access built into the doors, and critical facilities (storerooms, NMR, clean rooms) behind keypad-locked doors, or good old-fashioned metal lock and key.

Cogent arguments aside, the piece fails on just about every level for meaningful chemistry communication. Here's a random sampling of quotes from the story:

0:10 "...just the right chemicals to make a bomb?"
Well, most bombs require high explosives, like nitroglycerin or TNT. As most readers of this blog realize, materials such as iodine or hydrazine - unlike the dilute HCl or ethyl ether featured in the news spot - can actually be used to make bombs, and are under strict DOT and DHS purchase regulations.

0:53 - What's with the gunshots? Since when did that have anything to do with organic chemistry labs?

1:16 - "Compounds that could potentially be used in terrorist attacks"
While (potentially) true, you're more likely to find allyl alcohol in drug leads, and acrylonitrile in superglue!

1:20 - Oh no, duck and cover, that scientist is using a Karl Fischer apparatus!

2:43 - "...chemistry lab and storeroom." Have these people ever seen a chemical storeroom?

2:50 - "...cabinets, some unlocked, labeled ACIDS and FLAMMABLES."
Were the researchers supposed to just store them in plain gray cabinets? I would argue that the labels increase safety. Also, if they were allegedly "unlocked," why is there no camera shot of a cabinet door hanging open?

3:05 - "...large nitrogen tanks..." If the announcer knew that he was referring to liquid nitrogen, he'd be doubly afraid!

3:54 - "...hydrochloric acid, a highly corrosive chemical that can burn skin to the bone"
This bottle reminds me of the 1.0N HCl shown earlier (1:29).  If anyone's wondering, the pH of 1N HCl is 0.1, which, while enough to give you some decent skin irritation, won't char you on contact. I see no concentrated HCl anywhere, and even that's no TFA or triflic acid.

4:07 - "...ethyl ether, a highly flammable solvent that could cause respiratory problems!"
Or knock you out for surgery, like in the olden days at the MGH Ether Dome.

6:01 - "schools must list their chemicals of interest, but only if those chemicals exceed a certain amount"
This sounds an awful lot like "the dose makes the poison." (i.e., it's terribly tough to mount a terrorist attack with 25 g of magnesium sulfate...)

**Just for those keeping score at home, I counted 26 mentions of the word "chemical" (or once every 14.4 seconds). Always preceded by a sensationalist adjective like "dangerous," "deadly," "interest," "maim," or "flammable."
Posted by See Arr Oh at 7:38 PM