Update, 4/5/14: On Twitter, Yunus chimes in to recommend this Hashmi paper, showing a mononuclear Au(I) catalyst - with crazy adamantyl appendages - that gets down to 0.0001% loading!

--
Catalyst: A substance that increases the rate of a reaction without modifying the overall standard Gibbs energy change in the reaction (IUPAC Gold Book).

Though most chemists agree on the above definition, there have always been two camps: "Academic" catalysis (1-20 mol%, 5-100 turnovers), and "Industrial" Catalysis (<0.01 mol%, >10,000 turnovers). As more researchers seek to translate early discoveries into efficient, "green" processes, the desire for robust organometallic species has skyrocketed. 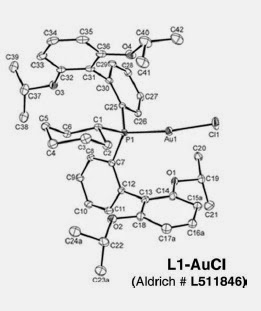 Right now, a few such homogeneous catalysts have made the jump: the Grela Ru metathesis catalysts (0.001%), copper catalysts for boron addition (0.005%), and some iridium and palladium species.

Now here's the fun part: the authors run several typical gold-catalyzed reactions side-by-side with their improved catalyst. In most cases, they're able to shave off 99.9% of the catalyst loading, with comparable yields. Granted, certain reactions take more time with this approach, but a few finish ahead of their literature counterparts. Wow.

Aldrich sells the precatalyst, if you're itching to try it yourself. I'll be very interested to see the next generation of bulked-up ligands, and whether this reactivity transfers over to other precious metals, namely platinum, iridium, or rhodium.
Posted by See Arr Oh at 6:18 AM