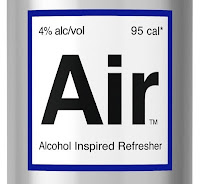 Heard about Air? It's a new malt beverage slowly permeating the Left Coast club scene. Its full brand name, "Alcohol Inspired Refresher," wants both a hyphen and a clearer concept of how an alcoholic drink can 'inspire' itself.

But, I digress...look at that cool packaging!

I'll admit, I'm a sucker for any consumer item that yokes the strangely brand-less periodic table into a marketing scheme. Look at those bold internal letters, the clean font, the stately blue rectangle. Based on previous experience, I'm guessing the atomic number of Air to be either 4 or 95; someone had better tell beryllium and americium that they'll soon be sleeping on the couch. The trademark (TM) symbol prompts another chuckle - what if Einstein, Bohr, or Seaborg could have profited from their respective elements?

Well, as they say, nothing's new under the sun: the periodic table watermark already appears on chocolate, wine, and famously at an MIT watering hole. But canned air? It's been done.