Here's the Whirlpool pop-up ad I saw that started it all: "Don't drink from the periodic table." #chemophobia http://t.co/M5MBCiKf

Done chuckling yet? I hope not, because you haven't seen the accompanying video, with cloying tagline "Pure Goodness." Apparently, for Whirlpool's target market - wealthy American moms with stupendously huge kitchens - the issue of anything in drinking water scares them silly. And that's the right word, because that pop-up ad above literally reads "don't Drink from the periodic table." Did I somehow miss the memo?

OK, I get it: filtering water removes certain trace metals and organic products you might not want to ordinarily consume - for the moment, we'll overlook fluoride, sodium salts, or relatively innocuous trace metals like iron and copper. If you believe the ad, every poured cup of tap water contains the following (~ 0:09 in the video): mercury, chlorine, lead, ethylbenzene, ortho-dichlorobenzene, lindane, atrazine, para-dichlorobenzene, endrin, MTBE, and benzene. Nevermind that two of the listed pesticides (lindane, endrin) are long-since banned from food crops, or that local water authorities test for most of the other potential contaminants. 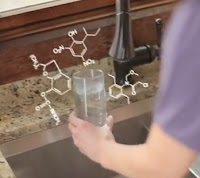 What about those scary-looking chemical structures at 0:05? (see left). I checked 'em out: from left, moving clockwise, you have carbofuran, dinoseb, and alachlor (Picky pedagogical note: I've never seen a gem-dimethyl group drawn that way before...should I expect some sort of agostic bond?). Dinoseb and carbofuran are both banned pesticides, and alachlor, though common, lists as only a Class III (slightly toxic) toxin.

As with all chemophobic ads, realize that Whirlpool exaggerates the situation to sell more fancy refrigerators. The same effect can be achieved with any carbon filter: remember Pur, or Brita? Perhaps then you wouldn't have to worry about the other pressing concern (0:58)...