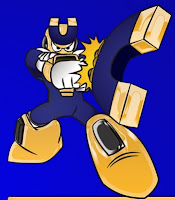 Please excuse my general lack of posting. When "Big Work Project" finally wraps, I'll have a bit more time for chemistry frivolity. In the meantime, how about a little collection of  almost-posts to help you into your weekend?

Faculty Fun: Maintaining a list of faculty moves can be tedious, but sometimes you find little gems on group pages. For example, Jeff Rinehart's group at UCSD will study magnetic materials. The logical mascot? A MegaMan master robot! (Vittorio would be so pleased...)

Last month, thought-provoking Chemistry World columnist Philip Ball wrote about white lab coats as badges of professional scientific stature. You may recall that one of my first posts here at JLC referred to the many ways in which such a white coat could be spoiled. I'm not exactly certain why - supplier availability, fire resistance, styling, cheaper? - but chemists in some younger synthetic organic chemistry groups seem to prefer blue lab coats.
Need evidence? Click below:

Finally, for fans of vermisynthesis (who isn't?), you may notice that the chemblogosphere is giggling about this recent Tetrahedron paper on catalytic earthworms. Quintus points back to a 2014 PLoS One, but how far back have chemists truly considered the lowly earthworm as synthetic feedstock? Professor Leonardo Santos of the University of Talca, Chile, has investigated bioreduction of beta-carbolines since at least 2013. Perhaps he was inspired by the work of Kohji Ishihara, who published similar reductive behavior in cell-free worm extracts back in 2006. And both should potentially thank D.Q. Keiline, a reference in Ishihara's manuscript, who back in 1920 published "On the pharyngeal or salivary gland of the earthworm," which portended some of the proteolytic enzymes found therein.


Tangentially, it's worth noting that an engineer in Colombia recently commercialized "biofilters" made of (living) earthworms, which clean organic solids from waste water. Seems someone should take a harder look at the potential catalytic goldmines wriggling underfoot.