The Ad's the Thing - Science Draws 'Em In 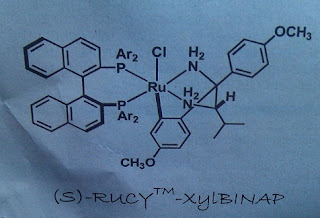 Regular readers of Chemical & Engineering News might have noticed a rather rare, eye-catching advertisement in the October 17, 2011 issue. Takasago, a Japanese fine chemical supplier, took out two side-by-side full-page ads (p.40-41) to illustrate the catalytic ability of their new RUCY hydrogenation complexes. The layout suggests two pages of a scientific lab notebook, complete with hand-drawn structures, a font resembling personal handwriting, a table of reagents, even a digitized signature! (I hesitate to believe this is this scientist’s real signature; legal repercussions aside, many Japanese and Chinese scientists sign documents with a stylized kanji or ink stamp).
A synthetic chemist captures the thrust of the ad immediately: high-turnover catalysts with high selectivity translate directly into time and material savings. But you don’t have to look far these days for “real-live” (staged) science at its best, selling everything from soaps to microprocessors.
I’m reminded of the old dishwashing detergent standard, where a model with long rubber gloves dips a soiled plate into each of two basins, one containing the competitor’s soap, and one with New! and Improved! versions of the blue solution on the right. The grime falls reliably off the desired plate, but the scientific take-home message? Surfactants, formulation, perhaps even enzymatic degradation. It may be exaggerated to make a buck, but the pitch subtly makes you aware of the scientific development underlying the product. The same message pushes through with rust cleaners (solubility, transition metal ligation), or home fragrances (aroma chemistry, vapor pressure, sublimation). Billy Mays (RIP) and his OxiClean never made peroxide bleaching seem so efficient . . . or so sexy.
Don’t think that all these ads just shill for chemistry. Intel’s “Science Rock Star” campaign a few years back featured a strutting, smiling Ajay Bhatt (or his doppelganger), the co-developer of USB technology, proverbially fending off female fans and doting admirers while signing laptops and drinking from his Intel mug. Tongue-in-cheek, maybe, but this ad shines a light on the glaring contrast between the public worship of performers, and the relative ignorance of scientific figures.