Lord of the (Small) Rings

Unlike common sigma donors - NHCs, amines, phosphorous ligands - EDO (electron-deficient olefin) ligands function as pi-acceptors. Instead of dumping electron density into oxidative addition (adding an R-X bond across a metal atom) EDOs speed up* the other side of  catalysis, namely reductive elimination (joining the organic fragments and restoring the metal's electrons). According to the authors, acceleration of reductive elimination helps to decrease the amount of substrate decomposition due to beta-hydride elimination. 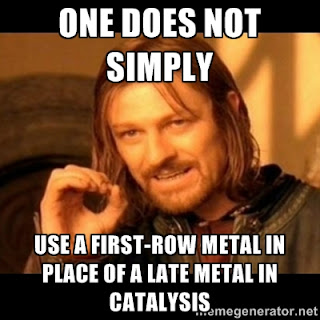 Doyle and coworker Dennis Huang report selective ring-opening of aziridines - no mean feat in itself -  and generate a quaternary center in the process, in 31-86% yields. Using a modified camphor-like sultam for their EDO, the group observes 27% ee, sure to be the focus of its own publication in the near future. Curious about related efforts in other groups? I recommend this Jamison mini-review.

Now, back to the name: "Fro-DO" carries the torch for a small-but-growing literature subculture. Chalk up another example to what The Atlantic recently called "Science's Love Affair with LOTR." I spent a few moments with SciFinder, trying to dig up some more chemistry-themed examples; the Atlantic points out many from geology and astronomy, and precious few from our molecular audience. Without further ado:

--
*...or maybe not. An observant commenter on Reddit noticed that Doyle and colleagues see no correlation between 13C shift of the olefinic EDO carbons and reaction rate. They posit, instead, substantial steric congestion around the metal surface as responsible for the rate enhancement.
Posted by See Arr Oh at 7:06 AM